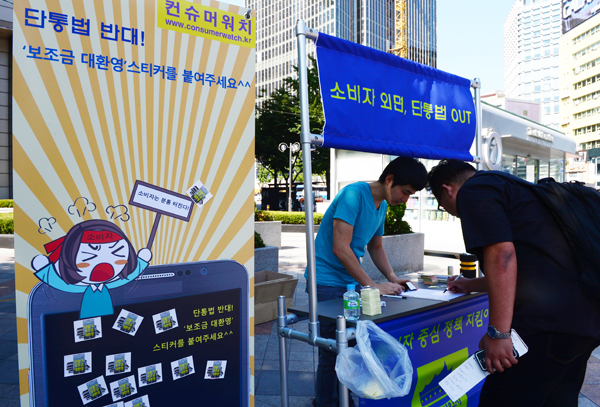 A citizen signs a petition yesterday prepared by the local consumer group Consumer Watch calling for the repeal of a subsidiary law that went into effect Oct. 1, in Gwanghwamun, central Seoul. [NEWSIS]

Korea’s three major mobile carriers increased some of their subsidies slightly yesterday, but criticism remained since most of the hikes were for old smartphones on expensive plans.

Under the Mobile Device Distribution Improvement Act, which took effect Oct. 1, mobile carriers can change the subsidies they offer on each phone once a week, keeping the amount below the 300,000 won ($279) subsidy cap set by the Korea Communications Committee. Yesterday was the mobile carriers’ second public subsidy announcement under the new law.

Although the carriers claim they are offering bigger discounts compared to last week, industry observers point out that the higher subsidies are mostly geared toward old smartphones with expensive calling and data plans, meaning few people would benefit.

“The subsidy amount will not be increased much until Apple starts selling its new models, the iPhone 6 and iPhone 6 Plus,” an industry official said. “That will be the time that most domestic manufacturers such as Samsung and LG Electronics will lower their factory price in order to compete with Apple.

“This [subsidy rise] looks like a strategy to shift their stock before they begin a battle against Apple.”

The new mobile device act was passed as part of the government’s goal to reduce average household spending on telecom services by notifying the public of the subsidies offered by each mobile carrier.

But consumers have complained that it doesn’t provide as much transparency as an earlier version, which required that mobile carriers and phone manufacturers announce their subsidies separately.

The separate disclosure scheme was scrapped after the government decided that the announcement of subsidies by phone makers could undermine the competitiveness of the industry.

However, SK Telecom decided not to change the price on Samsung’s latest smartphone Galaxy Note 4, which was released last month. The discount stayed at 111,000 won.

KT, the country’s second-largest mobile carrier, also announced its adjusted subsidies that benefit customers seeking an expensive plan. It almost doubled the discount from a week ago, from 82,000 won to 162,000 won, for a customer who wants to buy a Samsung Galaxy Note 4 under the most expensive plan, Unlimited 129. On the same plan, a customer can get 69,000 won more off a Galaxy S5 and a 115,000 won discount on a Galaxy S5 Broadband LTE-A.

LG U+, the third-largest mobile carrier, decided to raise its discount on the Galaxy Note 4 by 30,000 won on its most expensive plan, and left the rest of its subsidies unchanged.