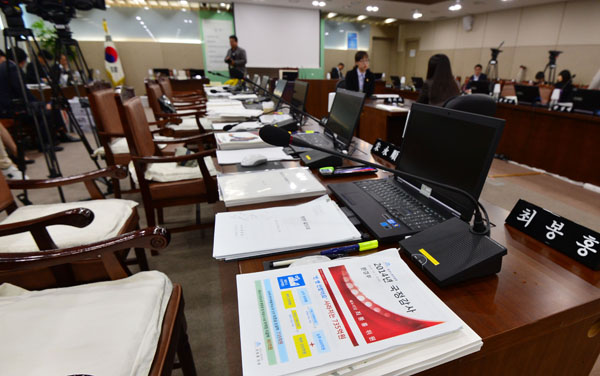 A parliamentary inspection into the Ministry of Environment is adjourned at the Sejong Government Complex after ruling and opposition lawmakers failed to agree on whether to summon major business owners for questioning. [NEWSIS]


Ruling and opposition lawmakers on the parliamentary Environment and Labor Committee traded barbs on the first day of the Assembly’s audit over the opposition’s push to call in conglomerate owners to testify.

Bickering among the 16 lawmakers yesterday led the committee meeting to be canceled, a reflection of the political stalemate that has swept the National Assembly in recent months.

“I was appalled to listen to a radio interview given by Rep. Kweon Seon-dong, who heads the ruling party lawmakers on the committee. He said the committee should refrain from putting businessmen on the witness stand just for the sake of giving them a hard time,” Rep. Woo Won-shik, a member of the New Politics Alliance for Democracy (NPAD), said yesterday during an inspection into the Ministry of Environment.

At the center of dispute among lawmakers from the ruling Saenuri and the main opposition is the NPAD’s demand that 36 business owners, including Hyundai Motor Group Chairman Chung Mong-koo, Lotte Group Chairman Sin Dong-bin and Samsung Electronics Vice Chairman Jay Y. Lee, be questioned on a range of issues, from labor disputes to employment tactics.

The Saenuri Party has refused to cooperate with the NPAD’s demand, however, claiming that the rival party is only trying to humiliate the chaebol tycoons.

“Would it be right for us to call in entrepreneurs conducting their business within legal boundaries as witnesses in an audit meeting so they could be humiliated?” asked Saenuri lawmaker Kweon Seong-dong, adding that it was not the National Assembly’s job to judge labor disputes within private companies.

According to Kweon, of the 36 business owners the NPAD wants to question, 23 will be grilled over labor disputes within their business places if they sit before lawmakers during the committee’s inspection, which ends on Oct. 27.