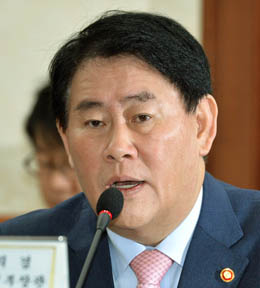 The Korean government decided on more stimulus in the next few months because of external factors hurting the economy, particularly fears of an interest rate hike in the United States.

During a meeting of economic ministers in Seoul yesterday, Finance Minister Choi Kyung-hwan announced that the government will be adding 5 trillion won ($4.6 billion) to its economic stimulus spending for the second half of this year.

If fully executed, total spending in the second half will amount to 31 trillion won.

The spending is part of the 41 trillion won created by debt guarantees for small and midsize businesses, regulatory easing and tax revisions that the government announced in July after Choi took office.

The goal of the 41 trillion won in spending was to try to revive the economy after it went into a tailspin following the sinking of the Sewol ferry in April.

The government reportedly spent half of the 26 trillion won originally allocated for the second half, and the economy seems to have been pulled out of its post-Sewol funk.

But the finance minister’s team is faced with an unexpected challenge in expectations that the U.S. Federal Reserve may consider raising interest rates as the U.S. economic recovery becomes more concrete.

As a result of those expectations, the U.S. dollar has been appreciating against foreign currencies including the Korean won. Although a weaker won would be an advantage for Korean exporters, the rising dollar is also a reflection of an exodus of foreign investors from emerging markets, including Korea.

As foreign investors have unloaded Korean stocks, the Kospi has been falling.

Foreign investors have been net sellers on the Kospi for the last five trading days. As they dumped shares, the market started below the 1,960 mark at 1,958.57 yesterday morning.

Institutional investors jumped in and their net purchases helped the market rebound to the 1,970 range for a while but not for long. The market lost steam later in the day and closed 0.39 percent lower than the previous day at 1,965.25.

Another external factor raising concerns is a sharper depreciation of the Japanese yen, also a reflection of the stronger dollar. A weakening yen is a major concern for Korea’s exports because many compete with Japanese products, such as automobiles, TVs and computer chips.

As the Japanese government continues to push a monetary expansionary policy, the Japanese currency has weakened at a much faster pace than the Korean won. Between July and early October, the Japanese yen weakened roughly 7 percent against the U.S. dollar while the won depreciated roughly 5 percent.

The Japanese central bank yesterday decided to maintain its pledge of increasing its monetary base at 60 trillion to 70 trillion yen ($554 to 646 billion) annually.

The Korean Ministry of Strategy and Finance has taken notice of rising uncertainties outside of the country.

In the ministry’s report yesterday, it said that the recovery momentum has weakened due to a struggling domestic market and low inflation but also from external risks and lack of investment.

The government estimated that with the increasing spending, between 0.1 and 0.2 percentage points will likely be added to fourth-quarter growth.

“When considering the overall economic situation, our domestic market could fall below our initial projection,” Minister Choi said. “We’re at a point of urgency for risk management by countering the yen and putting efforts on additional policies that will help the domestic market.”

The finance minister is also pushing the Korean central bank to make an additional interest rate cut following one made in August to further boost the domestic market by increasing liquidity.

Whether central bank Gov. Lee Ju-yeol will comply is in question. Another rate cut could further drive foreign investors to leave the local market.The BOK is likely to lower its economic growth estimate for the year to the mid-3 percent range. The central bank will be announcing its revised outlook next week. Governor Lee, while being audited by National Assembly lawmakers on Tuesday, said he believes, in the current circumstances, 3.8 percent economic growth by the end of this year will be difficult.

“When looking at the indicators that have been confirmed so far, economic growth will likely fall short of the initial estimate of 3.8 percent,” Lee told lawmakers. “It is likely that the growth will be in the mid-3 percent.”

Although the outlook has been lowered for the third time this year, Lee continued to deny that the economy was in a state of deflation.