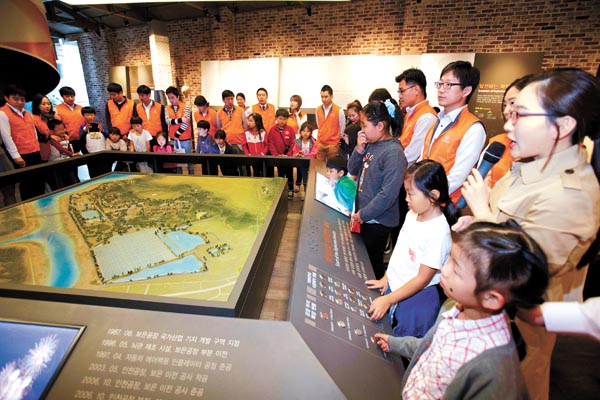 Employees of Hanwha Group and children from multinational families visit the company’s history museum in Incheon on Tuesday. The event was the start of a volunteer campaign that executives and employees from 22 affiliates of Hanwha have planned to celebrate its anniversary. Provided by the company


Hanwha Group quietly celebrated its 62nd anniversary yesterday by announcing a new round of volunteer work.

According to the energy conglomerate yesterday, its employees and executives have decided to serve society throughout September instead of holding a celebratory event. Corporate responsibility has been a part of Hanwha’s philosophy and agenda since 2007.

All of Hanwha’s 22 affiliates will participate in the monthlong campaign of volunteer work.

This includes employees coaching about 60 children from Daejeon and Chungcheong provinces in baseball along with the Hanwha Eagles’ coaching staff.

Hanwha said this is the eighth year that its employees have carried out the month of volunteering to mark its founding.

It is among the conglomerate’s biggest annual social contribution campaigns and has been championed by its chairman, Kim Seung-youn.

The chairman first started the campaign in 2007 to stay true to the founding philosophy of the conglomerate, which is to “go far together [with society].”

He believes that it is the conglomerates’ social duty to improve the country and the community that has helped the business expand over the past six decades.

Most of the volunteer programs are designed to provide cultural experiences to children who are in welfare facilities, many of which have long relationships with Hanwha.

The volunteer campaign started yesterday with 31 executives and employees visiting the Hanwha Historical Museum in Incheon, each chaperoning a child from a multinational family.

The children spent time learning about the history of the conglomerate, which started off as a dynamic manufacturer in 1952.

On Wednesday, about 20 or so executives and employees, including Hanwha Group Vice Chairman and Hanwha Life Insurance CEO Kim Yun-bae, made side dishes that were delivered to a welfare institutions for children. In addition to the food, school supplies and other household items for the children were delivered to them as well.

“This will be the most meaningful anniversary celebrated at Hanwha Group, whose belief has been to go far with our society. When we can pass on this dream to young children in the future, they will grow up to be the driving force of our society,” said Vice Chairman Kim.