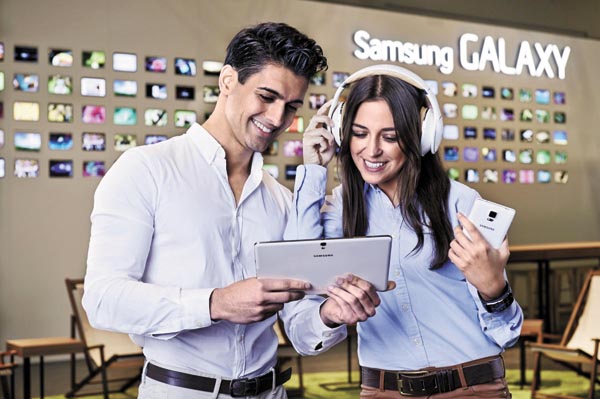 Samsung Electronics announced yesterday it is participating in the digital book fair held in Frankfurt, Germany, which kicked off on Oct. 8 and will run through Oct. 12. Provided by the company

Samsung Electronics, which suffered heavy losses in its smartphone business in the third quarter, is aiming to strengthen its flash memory business as the big data business and B2B market grow. According to the company yesterday, it became the world’s first memory chip manufacturer to successfully mass-produce 3-bit multilevel-cell (MLC) three-dimensional (3-D) vertical NAND (V-NAND) flash memory that are to be installed on solid-state devices (SSDs) to replace hard disks.

“With the addition of a whole new line of high-density SSDs that are both performance- and value-driven, we believe the 3-bit V-NAND will accelerate the transition of data storage devices from hard-disk drives to SSDs,” said Han Jae-soo, the company’s senior vice president. “The wider variety of SSDs will increase our product competitiveness as we further expand our rapidly growing SSD business.”

As its smartphone business is squeezed by rising competition from low-end Chinese vendors and larger smartphones by rival Apple, the company recently has been ramping up its V-NAND development especially since V-NAND chips are expected to account for 26 percent of the global SSD market by 2018.

Samsung Electronics suffered a massive fall in operating profit due to the weakness of smartphone sales. The company announced Tuesday that its operating profit when compared to the previous quarter was down 43 percent and had fallen 60 percent from a year ago, when it posted an all-time record of 10 trillion won ($9.39 billion).

It’s speculated that the operating profit of the company’s mobile device and computer business, which includes smartphones, was under 2 trillion won in the July-September period. The situation is expected to be similar in the fourth quarter. As a result, the company is searching for businesses that will help it replace its heavy dependency on smartphones.

Samsung is reportedly trying to solidify its dominance in the field. The Korean company currently holds the top position in the global NAND flash market with a market share of 37.5 percent.