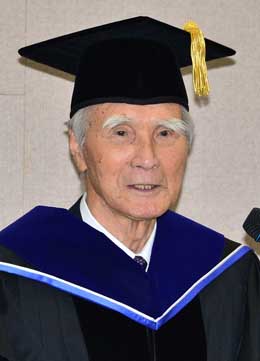 Tomiichi Murayama, a former Japanese prime minister who in 1995 apologized for his nation’s wartime aggressions in the first half of the 20th century, gives a commemorative speech yesterday after receiving an honorary doctorate in political science and diplomacy from Soongsil University in Donjak District, southern Seoul. Current Japanese Prime Minister Shinzo Abe has distanced himself from the 1995 Murayama Statement, claiming there is no definitive answer in academia or within the international community on what constitutes aggression. [NEWSIS]