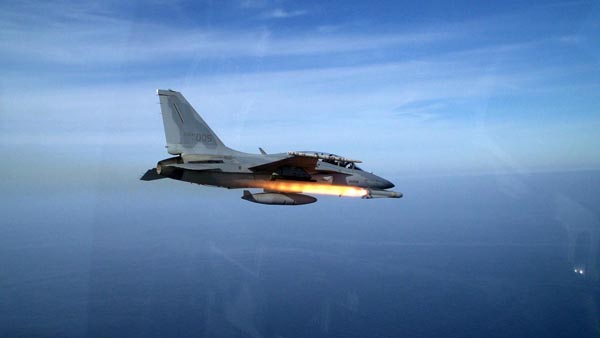 An AGM-65G Maverick is fired from an FA-50 fighter jet. [NEWSIS]

The Air Force said yesterday that its indigenously developed FA-50 fighter jet had succeeded in firing a guided missile that reached its intended target in the sea.

The live firing exercise took place on Wednesday over the East Sea, the Air Force said. During the drill, an FA-50 fighter jet fired a guided missile, an AGM-65G Maverick, from an altitude of 1.2 kilometers (0.7 miles) and hit its target about 7 kilometers away. The target was a retired ship.

“With the successful live firing, we were able to confirm the precision attack capability of the FA-50s, built with our own technologies,” said an Air Force official.

The FA-50 Fighting Eagle is a light combat aircraft manufactured by Korea Aerospace Industries. It is a combat version of the T-50 Golden Eagle supersonic advanced jet trainer.

The FA-50s are meant to replace the military’s aging fleet of F-5s, and the Air Force started operationally deploying them last year.

Capable of flying at a maximum speed of Mach 1.5, the light attack aircraft can carry weapons weighing up to 4.5 tons and be armed with air-to-air and air-to-surface missiles and general-purpose bombs. It is also mounted with a three-barrel Gatling gun.

The aircraft can also be armed with precision-guided weapons.

Korea signed a deal to export 12 indigenously developed FA-50s to Indonesia in 2011. Iraq also agreed to buy 24 units last year, and the Philippines earlier this year agreed to purchase 12 FA-50s.