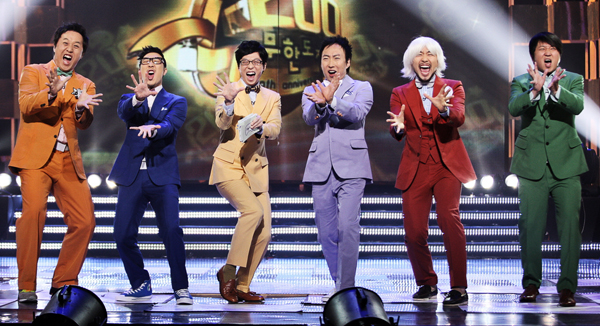 The program’s six cast members, including Yoo Jae-suk and producer Kim Tae-ho, showed up for the press event, and a question and answer session followed.

Asked whether the team plans to recruit an additional member, Kim responded, “We’ve never discussed it. And these six members are fulfilling their given tasks.”

The singer Gil left the team in April after he was convicted of driving under the influence. Since then, the show has stuck with the original remaining cast. First launched in April 2005, “Infinite Challenge” is one of the longest-running variety TV shows on prime time, and the MBC program has consistently headed the top 10 list of Korean variety shows.

In each episode, the “Infinite” team, composed mostly of celebrities and comedians, is given a different challenge, such as to compete in a professional wrestling match.

The special edition 400th episode will air next Saturday. Cast members will reportedly pair up and go on vacation.