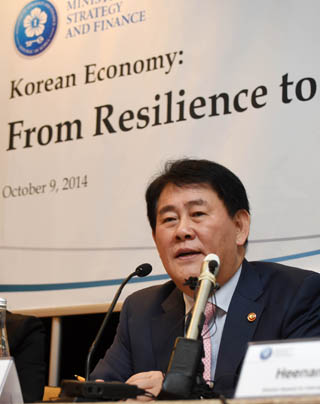 Choi Kyung-hwan, deputy prime minister for the economy and finance minister, speaks about the Korean economy at a briefing session for investors Thursday in New York. Provided by the Ministry of Strategy and Finance

NEW YORK - The impact of the winding down of U.S. quantitative easing will be limited in Korea due to the country’s strong economic fundamentals, Finance Minister Choi Kyung-hwan told an audience of about 200 American investors and representatives of financial institutions in New York City.

“The U.S. QE tapering and a possible early interest rate increase would help the U.S. economy as well as the Korean economy,” Choi said at an investor relations meeting at the Four Seasons Hotel in Manhattan on Thursday, local time.

The minister organized the event a day ahead of the gatherings of G-20 finance ministers and central bank governors, as well as annual meetings of the International Monetary Fund and the World Bank that start Friday, local time, in Washington, D.C.

“Unlike other emerging countries, the Korean economy will be impacted less by capital outflows thanks to high foreign exchange reserves, a low ratio of short-term foreign debt and a large current-account surplus.”

The last time Korea held a comparable event in the United States was in 2005 under Han Duck-soo, then the deputy prime minister for the economy.

Soofian Zuberi, managing director of Bank of America Merrill Lynch, Elinor Hoover, vice chairman of capital markets origination at Citi, and Stephen Schwarzman, chairman of Blackstone Group, were among about 200 high-profile figures from the financial industry who attended the event.

Under the theme “From Resilience to Breakthrough,” Choi explained his team’s July macroeconomic package - ranging from tax changes to eased real estate regulations - has 41 trillion won ($38.2 billion) worth of fiscal measures to reform the services sector.

“Korea will be a leading country in combating the global low-growth trend with its stimulus package,” said Choi. “The global economy and Korean economy face a new challenge of low growth and low inflation.”

The Korean economy did relatively well compared to others, recording an annual growth of 3 percent in 2013. But if the current slowdown and low inflation persist, it could settle into a low-level equilibrium, the minister explained.

“The Korean government decided to take decisive measures to steer the economy away from that, and the primary purpose is to boost household and corporate income,” he said.

To the question of comparing the Korean measures with QE measures in advanced nations, Choi answered that Korea’s are fundamentally different.

“It is not appropriate to call these measures of the Korean government quantitative easing, because Korea’s expansionary measures are aimed at enlivening economic players,” he said. “While QE in advanced economies is intended to expand their monetary policies and depreciate their currency as a trickle-down effect, the Korean measures are based on the country’s policy capability and aimed at reforming the economic system.

The minister emphasized all of the government measures are focused on creating a “virtuous cycle of increasing household income and encouraging private consumption.”

Among the attendees, some expressed concerns about the impact of the weak yen on the Korean economy.

“At the moment, the impact is limited, as Korean exports to Japan slightly declined, but it could have significant consequences if the trend continues,” said Choi. “So we are trying to use this the other way around by encouraging domestic businesses to buy more capital goods from Japan at lower prices and increase their investment in the domestic market.”

As for the risk from North Korea, Choi said there is no need to worry as relations between South Korea and North Korea are currently favorable.

“From the outside, the North Korea issue may seem like a risk, but the Korean people are not that sensitive about this issue,” he said. “You don’t need to worry about South Korea’s relations with the North. Three of the most powerful North Korean government officials made a surprise visit to the closing ceremony of the Incheon Asian Games, and the two countries are seeking dialogue on many issues.”

Choi’s briefing on his policies to boost the Korean economy were generally well received by those in attendance.

“The United States also needs such directed economic policies,” said Jerome Silvey, executive vice president of Starwood Capital Group, after Choi’s presentation. “The minister is very focused and has a strong understanding of the economy.”

“Foreign investors I have talked to have confidence in what the Korean government is doing,” said Patrick Doyle, managing director of Asian Equity Sales at Merrill Lynch. “Although some investors are concerned about the weak yen’s impact on Korean exports, foreign investors generally plan to increase their investment in Korea in the next few years.”

Meanwhile, Bank of Korea Gov. Lee Ju-yeol, who will attend the G-20, IMF and World Bank meetings, met with correspondents in Washington.

Choi and Lee had different views on economic growth this year. While Choi forecast nearly 4 percent growth for 2014, Lee said it would be in the mid-3 percent range.

“First-quarter growth recorded 3.9 percent, but in the second quarter it fell more than expected, to 3.5 percent,” said Lee. “Considering that the final quarter won’t be easy, the annual growth may not reach the 3.7 percent forecast by the IMF.”

The impact of the disastrous sinking of the Sewol ferry was more serious than initially expected, severely contracting household consumption and business investment, Lee said.