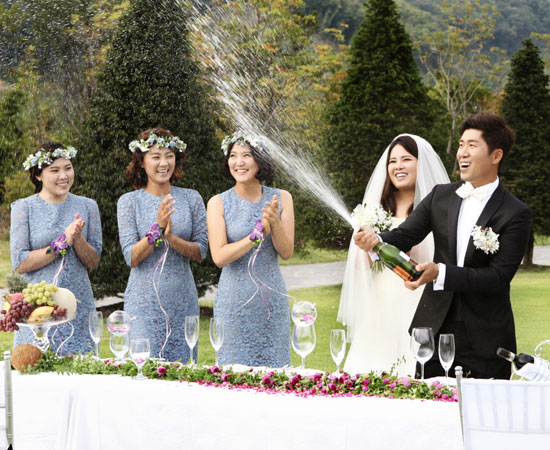 
Park In-bee, the No. 2 female golfer in the world, is set to wed golf coach Nam Ki-hyeop on Monday. The couple has been dating for six years.

“I’m starting to realize that the wedding is actually going to happen now since I’m wearing a wedding dress,” she said last Tuesday when she visited a local dress shop.

Park and Nam first met in late 2006 during off-season training in the United States. They have had a romantic relationship since 2008.

When Park fell into a four-year slump following her championship win at the 2008 U.S. Women’s Open, Nam stayed by her side, offering his full support.

“In spending difficult times together, my trust in him grew, and we have gotten along well without getting into fights as often,” Park said. “I think I will have more responsibilities and stability after marriage, which I wish to have.”

The pro-golfer added that she values balance in her life as well as her sport.

While some golfers choose to marry in November or December, during the off-season, Park decided to hold her wedding this month, despite a busy season on the LPGA tour.

Like many brides to be, Park attended a wedding photo session like other brides last September while managing her commitments.

“This is going to be a once-in-a-lifetime moment,” she said. “I would like to fully prepare and have the wedding as a blessing.”

Park’s fellow Korean golfers on the LPGA tour are planning to come to the ceremony.

Comedian Kim Je-dong will act as the emcee while singers Kim Yeon-woo and Jung Dong-ha are set to sing the nuptial songs.

“I haven’t yet officially proposed to her because of her busy schedule,” Nam said. “I am thinking of proposing to her at the wedding with my friends’ assistance.”

But when it comes to expanding her family, Park said it won’t happen until after the 2016 Rio de Janeiro Olympics.

“Golf is going to be the official Olympic sport for the first time in 112 years at the 2016 Olympics,” she said. “And I set my goal to attend the Games as a national player and will do my best to achieve my goal of focusing on playing golf.”

But at the same time, Park said she will also do her best to be a good wife and is eager to become a better cook.

“I am not yet a good cook. I couldn’t invite people over to have them try my food,” she said.

“But I know how to make kimchi soup and soybean-paste soup. I would like to be a role model, successfully managing both roles of being a wife and a golfer.”

Park and Nam’s wedding will be held at 5 p.m. on Monday at Seowon Valley Golf Club in Paju, Gyeonggi.