North shoots at balloon launches along the DMZ

North shoots at balloon launches along the DMZ 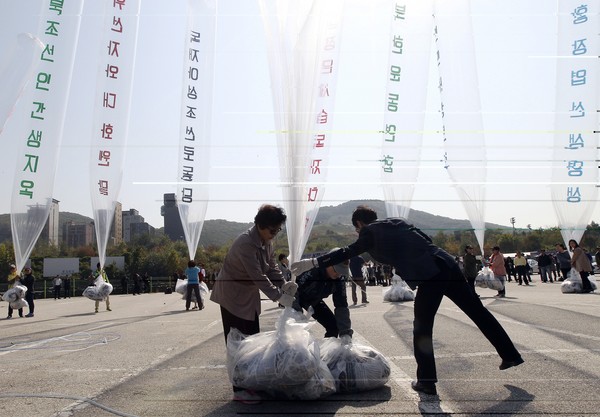 North Korea fired antiaircraft rounds at balloons carrying anti-Pyongyang propaganda leaflets over the inter-Korean border, prompting the military to fire back as some of the shots landed on the Southern side.

Yesterday was the 69th anniversary of the founding of the North’s ruling Workers’ Party.

Sounds of shots believed to have originated in the North were heard from 3:55 p.m. through 4:10 p.m., and some shots landed south of the border.

The military aired a warning to the North at 5:30 p.m. and fired back 10 minutes later with 40 rounds from K-6 machine guns from general posts on the border line. Following the return shots, the North fired back again.

The military put all units in Yeoncheon on the highest alert.

According to the Joint Chiefs of Staff, shots presumed to be the North’s 14.5-millimeter bullets were found near units on the border at around 4:50 p.m. The JCS did not receive reports of casualties as of 7 p.m. yesterday.

Pyongyang has repeatedly demanded the South Korean government stop the civic groups, mainly comprised of North Korean defectors, from dispatching such balloons over the border.

On Thursday, the North’s state-run Korean Central News Agency aired an official warning that said the launches will lead inter-Korean relations to an “irreversible collapse,” calling these actions a “frantic effort” to jeopardize Seoul-Pyongyang relations that it said recently “saw a thaw.”

Faced with the tough warnings, the government advised the anti-North civic groups to exercise restraint.

It was the North’s first military action against the anti-Pyongyang balloon launches, although it repeatedly threatened to retaliate. It also marked the first time the North fired shots into South Korean territory since its bombing of Yeonpyeong Island in Incheon in November 2010, which killed two Marines and two civilians.

Despite the North’s repeating warnings, defector-turned-activist Park Sang-hak said he would go ahead with the launches, and he did.

The skirmish between the two Koreas came only three days after they exchanged fire on the maritime border in the West Sea, and also comes as North Korean leader Kim Jong-un has been out of sight for 37 consecutive days as of yesterday, spawning speculation about political instability in the North.

Each helium-filled balloon contained thousands of lightweight plastic bags printed with denouncements of the North Korean regime and illustrations of Seoul’s rapid economic development. The leaflet organization also puts a $1 bill in some bags to help struggling Northerners.