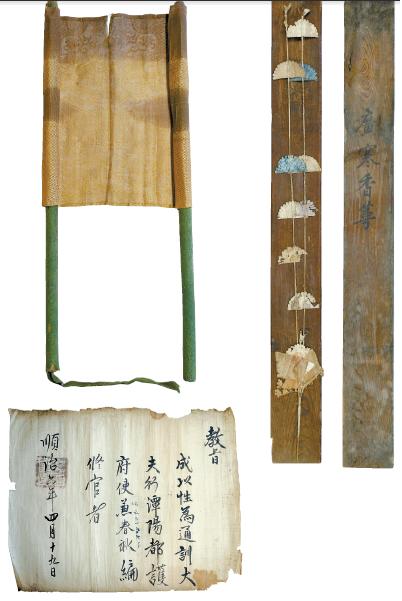 Artifacts that belong to Seong Yi-seong, who is believed by some to be the real-life version of a character in the love story “Chunhyangjeon,” are shown clockwise from above right: a certificate given to a royal prosecutor; a letter of appointment from King Injo (1595-1649); and a face cover. By Gong Jeong-sik

The story of Lee Mong-nyong and Seong Chun-hyang in “Chunhyangjeon [Story of Chun-hyang]” is considered locally as the greatest love affair of all time, just like how “Romeo and Juliet” is viewed in some parts of the world.

And similarly to the characters in the Shakespearean play, Lee and Seong are thought to be fictional.

But fresh claims surfaced last month that Lee is based on a real person, with Korean academics investigating whether or not these assertions are true.

The Korean Studies Advancement Center recently announced that a descendant of the aristocrat Seong Yi-seong (1595-1664) has donated about 700 artifacts related to him to the institution. The descendant, Seong Ki-ho, also says that the aristocrat was a real-life model for Lee’s character.

“We began a study on any correlations between Seong and Lee,” an official of the center told the JoongAng Ilbo last month.

Lee and Seong’s narrative was written during the Joseon Dynasty (1392-1910). Its author and publication date are unknown, but historians presume the novel was penned sometime in the 18th century.

In the story, a boy named Lee Mong-nyong, a son of a Namwon official, meets Seong Chun-hyang, a daughter of a gisaeng (female courtesan) in Namwon, North Jeolla. The two fall in love, but Lee leaves Seong because his father relocates to Seoul. A villainous Namwon official notices Seong’s beauty and demands she have sex with him, but Seong refuses. She is tortured as a result, but does not change her mind due to her love for and loyalty to Lee.

Meanwhile, Lee passes the state examination in Seoul and comes back to Namwon as an undercover royal investigator. He discovers that the official is corrupt and rescues Seong.

Allegations that Joseon’s version of Prince Charming is based on a real love affair experienced by Seong Yi-seong were first raised in 1999 by Seol Seong-gyeong, a professor of Korean language and literature at Yonsei University. 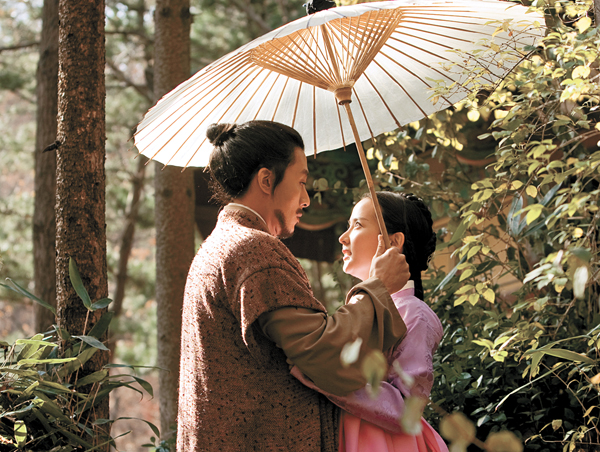 A still from the 2010 film “Bang Ja Jeon,” which is based on the love story of Lee Mong-nyong and Seong Chun-hyang. The tale has been adapted many times into films, dramas, plays and novels in Korea. The role of Chun-hyang is considered the role of lifetime for female actresses in Korea. [JoongAng Ilbo]

The latest claims, however, have created a resurgence of interest in the theory.

But what proof do the professor and the descendent have that Lee is Seong?

It is a historical fact that Seong moved to Namwon, North Jeolla - where the love affair took place - at the age of 12 and stayed there until he was 16 with his father, who served as a government official. Also in the tale, Lee met Seong when he was 16, and later, the real-life aristocrat passed the state exam and served in various government posts, including as a royal investigator.

Among the 700 artifacts the descendant Seong Ki-ho donated to the Korean Studies Advancement Center are royal documents his ancestor received upon passing the state exam in 1627; a face cover that royal prosecutors used; and a journal that he kept during his activities of subterfuge.

In one of the entries in 1647, Seong wrote: “After dark, I asked all officials and courtesans to leave. I sat at Gwanghan Pavilion by myself and recollected the events of my childhood. I could not fall asleep for a very long time.”

Professor Seol and Seong Ki-ho believe that the events of his childhood refer to his affair with Seong.

Some may argue that the evidence is circumstantial, but perhaps a more substantial piece of proof is a phrase from the book “Gyoamungo,” which Seong Sub (1718-88) - another descendent of Seong Yi-seong - wrote about his ancestor and his achievements.

This scene and the poem are the climax of “Chunhyangjeon.”

“I have been told since I was very young that our ancestor is Lee Mong-nyong,” Seong Ki-ho said. “But I just kept it to myself, as Lee in the story is portrayed as a [Prince Charming] who is only interested in romance.”