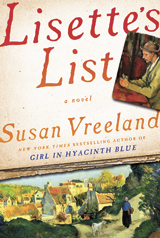 In the novel, Vreeland’s eighth, Parisian art lover Lisette Roux adjusts to life in the small town of Roussillon, where she must help care for her husband’s ailing grandfather, Pascal.

It is a departure from Vreeland’s historical novels about a single painter or work, like “Girl in Hyacinth Blue” and “The Passion of Artemisia.”

Most of the characters and two paintings are fictional creations, but fans counting on true-to-life appearances from real artists won’t be disappointed. The homesick Lisette warms to Roussillon as she learns of its rich ochre-mining history, Pascal’s art collection and his memories of painters like Cezanne and Pissarro. But as war threatens, Lisette must balance protecting the legacies of the past with trying to find a way to move forward.

Vreeland, 68, spoke to Reuters from her San Diego home about her love for Roussillon and the need for the “cross-fertilization” of art and literature.

A. I began to feel that it was too constraining. Readers would email me and say, “Please write a novel about so-and-so,” but it has to come from yourself and not so much from your readership. This one came out of that need to completely invent for myself, finally, and devote my imagination to creating characters whom I could love, whom I wanted to embrace and follow the trajectories of their lives.

Were you inspired by visiting Roussillon?

I absolutely fell in love with it, those colors, those red ochres, rosy ochres and golden ochres of that village, and learned that those colors came from the ochre quarries and mines, which extracted the ore. And that gave me a substantial artistic link to that region. The notion that extracting the ochre of the landscape was the first step in creating a painting, that dawned on me forcibly.

As part of your research, you spoke to locals who lived during the war. Describe the experience.

On my second trip to Roussillon, I interviewed a man and a woman who lived there during the war, and a boy. They were useful to me and so generous with their time.

Did it feel different to write about people who look at art, rather than those who create it?

I loved the liberty of having the artist be peripheral and then come into the story through another character. They’re a little distant to us. We don’t really know whether Pascal is telling us his memories accurately or not.

What role can a novelist play in the art world?

I would like to bring people who have never been to a museum into a museum. And I would like to bring museum-goers into libraries. I think there ought to be this cross-fertilization. The gift art gives us is that instead of seeing only our own world, we see into other times, which offers a window into other cultures and sensibilities. And each time we enter imaginatively the life of another, I think that’s a small step upward in the elevation of the human race.

As a historical writer, how do you teach without seeming professorial?

I wrote 12 drafts! Nine before my editor even saw it. You have to find devices to convey the history without it coming from an authorial voice. In this case, the BBC reports on the radio could serve as my historical voice. There was another situation, the bombing of Gordes, where I had to invent a man who escaped and then told the mayor of Roussillon, so that’s how the Roussillon people knew what was happening.

Every Nazi, every person in France who carried out the German orders, must have had to go through a rationalizing process. And there was anti-Semitism in France before this war, and the war absolved those people who were anti-Semites to act with the cover of the occupational government. So it’s very complicated, and that’s the purpose I think; historical fiction can bring forth that human element.