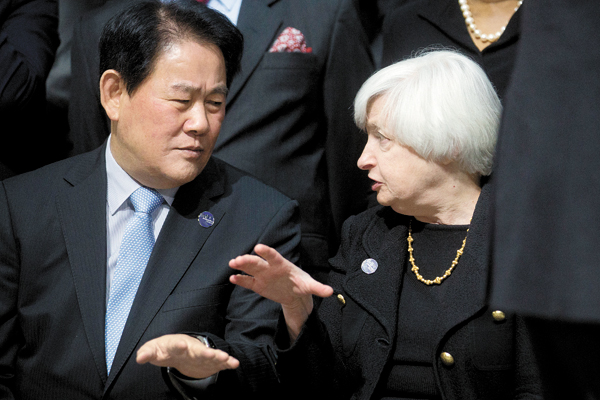 
WASHINGTON - Based on a shared assessment that Korea’s economic recovery is too weak, both the government and central bank see the need for another interest rate cut.

But they have subtly different views on the severity of the capital outflows that will follow.

During a trip to the United States last week, Choi emphasized Korea’s healthy fundamentals and downplayed the possibility of rapid capital outflows, even in the case of an early U.S. rate increase.

“We currently have measures that mainly check capital inflows, but the government will review plans for complementary measures for outflows,” Choi said at a press conference in Washington, D.C. on Saturday after attending the 2014 International Monetary Fund and World Bank annual meetings.

The minister’s basic stance is that even if advanced countries raise their interest rates, there will be no rapid capital outflow thanks to Korea’s sufficient foreign exchange reserves, low ratio of short-term foreign debt and current account surplus. His remarks, however, are interpreted as meaning that the government will prepare for the slim chance of heavy outflows.

“There have been increasing capital inflows because of high expectations for the new economic team, but foreigners are probably now changing their minds, because of the strong dollar,” Choi said. “I don’t consider this outflows.”

The minister suggested the government would consider easing the so-called “macroeconomic soundness package,” comprised of limits on forward exchange positions, taxation on foreign investments on bonds and taxing banks on foreign borrowings.

“The three measures are used to contain excessive inflows of foreign capital that shake our economy, but we will consider using the measures reversely,” he said.

According to an explanation by a high-ranking official at the ministry, some of those measures are considered tight regulations, and the government could loosen them.

The Korean finance minister also highlighted that he and the central bank governor agree that the economic recovery fell short of expectations. He also implied there is a consensus that another rate cut on the nation’s key borrowing rate is likely to happen. The BOK will hold a monthly meeting of the monetary policy committee on Wednesday, in which the committee is expected to lower its growth forecast and determine the key rate.

But Choi and BOK Gov. Lee still seem to have different views as to the impact that the lower rate would have on the economy.

“If the difference between the domestic interest rate and overseas rates narrows, there are possibilities of capital outflows,” Lee told reporters on Friday in Washington.

“I think the deputy prime minister implies that there will be no such result [rapid capital outflows] because of just a one-time rate cut,” the governor said.

As a result, the biggest question now is how much the BOK will lower the rate.

“Headline inflation is set to remain a long way below the BOK’s target,” it said in a report. “This provides the BOK with a free hand to cut rates by a further 25 basis points.”

“It is normal that central banks of any countries take conservative stances,” Choi said. “And some criticize private meetings between the finance minister and central bank governors, but that is absurd. We need to meet up a lot more and talk about the differences between the government and the central bank.”

Lee also said he believes the independence of the BOK monetary policy committee is well guaranteed.

Meanwhile. the finance minister suggested a swift shift from monetary and fiscal policy economic stimulus measures to structural reforms is needed to prevent the current low growth from being protracted in an address at the 30th Meeting of the International Monetary & Financial Committee.

“So far, fiscal and monetary policies have been at the center of the debate from a short-term perspective,” Choi said in his address to the committee members Friday at the headquarters of the International Monetary Fund in Washington D.C. “However, structural reforms in a timely manner are necessary to strengthen supply-side capacity, lift growth potential and avoid an extended period of low growth.”

The committee is formed of 24 governors representing different regions of the 188 member countries. Choi attended the meeting on behalf of 15 Asia-Pacific countries including Australia, Uzbekistan and Papua New Guinea.

Such remarks are interpreted as meaning the focus of the Korean government’s economic stimulus package will soon move from monetary and fiscal measures to structural reforms.