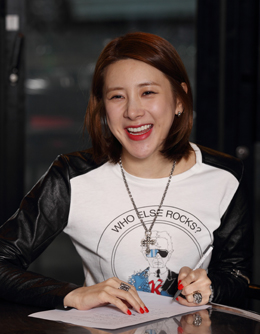 Singer Seo In-young is returning with the new digital single “Saeng-gak-na,” which roughly translates to “Thinking of You.”

Unlike her previous hits, which were mostly dance tunes, Seo’s new song has more of a groovy soul emphasis, likely because hip-hop artist Zion. T is featured in the song. Zion. T has worked on the hip-hop albums of many artists such as G-Dragon and Dynamic Duo.

The new single will be revealed to the public today at midday. Seo had a press event yesterday ahead of the release in Donggyo-dong, western Seoul, to talk about the new track. During the press event, Seo said her new single is more candid compared to her previous songs because she tried to “frankly write her thoughts about love and relationships.”

She continued: “I personally like ballads, but a part of me also wants to perform on stage. It’s hard to define me with just one genre, but I think that is also my asset because I can do both.”

Having debuted in 2002 as a member of the girl group Jewelry, Seo has gained admiration for her straightforward and bubbly personality.