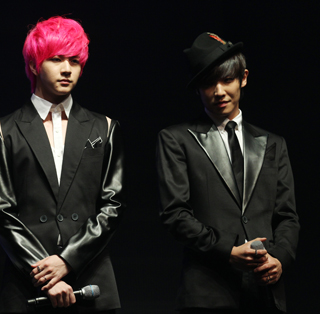 Lee Joon and Cheondung (Thunder), members of the boy band Mblaq, will leave the five-member boy group after their agency contracts expire.

According to local news reports yesterday, Lee, who sings in the boy group but is also seeking a solo career as an actor, will focus on his acting career if he leaves the band.

Having debuted in 2009 as a vocalist in Mblaq, Lee has continuously acted in numerous films and drama series. Most recently, he played the role of a psychopath in the tVN drama series “Gapdong.” Only four months have passed since the show ended, but Lee has already signed up for another drama series, “Mister Baek,” which will hit TV screens next month.

Unlike Lee, Cheondung, the younger brother of 2NE1 member Sandara Park, is likely to pursue a solo singing career.

Their agency, J-Tune Camp, released a statement yesterday and said, “Nothing has been decided regarding the departure [of Lee and Cheondung].

“It is true that the expiration date [of their contracts] is coming,” the company continued, “but we’re discussing their next moves with them. We’ll respect their thoughts and decisions.”

Lee and Cheondung’s last performance as members of Mblaq will be the concert “Mblaq Curtain Call,” which will be held in Seoul on Nov. 20 and 30.