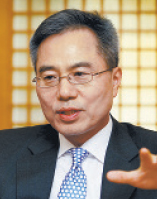 Citibank Korea President Ha Yung-ku has tendered his resignation in a bid to focus on the race for KB Financial Group’s chairman.

According to industry sources, Ha, who is serving his fifth term at Citibank Korea, recently handed his resignation to the board. It will be made official after the board and shareholders approve it.

His departure comes after he was included on the list of seven candidates selected by KB Financial Group’s chairman recommendation committee. Nine people were originally shortlisted, but two contenders declined the job right after the list was announced earlier this month.

Ha was made president of Hanmi Bank in 2001 and stayed in that post after the institution was taken over by Citibank in 2004. His term was supposed to end in March 2016.

Ha’s resignation was somewhat expected after he was included on KB’s list of potential chairmen. The 61-year-old Ha was the only person on the list who was serving as a CEO at a financial institution.

It isn’t clear whether Ha will be included on the recommendation committee’s second shortlist, which will be trimmed to four candidates after a meeting on Thursday. However, industry insiders speculate that sacrificing his position demonstrates Ha’s commitment.

He received a 2.3 billion won ($2.15 million) salary in the first half, the highest among all bank CEOs. The KB chairman only receives about one-fourth of Ha’s Citibank pay.

With Ha ending his career at Citibank, the industry’s attention is also focused on who will succeed him.