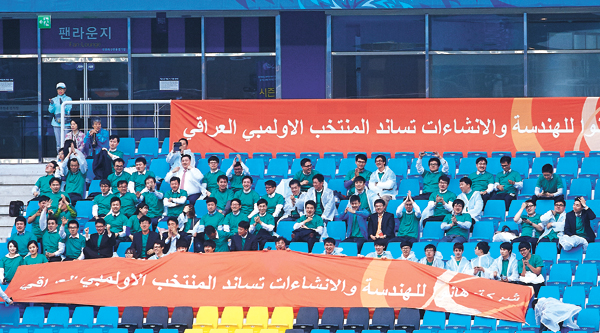 Hanwha Engineering and Construction employees cheer for Iraq’s national football team in the match with Thailand on Oct. 2 at Incheon Football Stadium.Provided by the company

Hanwha Engineering and Construction (E&C) workers showed their support for the Iraqi national football team during the 2014 Asian Games that ended Oct. 4 by cheering in the stands despite the rainy weather.

The company has built the world’s largest precast plant in Iraq and runs several construction projects in the country.

About 100 employees from the company gathered at Incheon Football Stadium on Oct. 2 to root for Iraqi players in the men’s football final against Thailand for the bronze medal.

Despite the rainy weather, Hanwha E&C officials continued to cheer enthusiastically for the team.

The two-hour match resulted in a 1-0 victory for the Iraqi team, earning them the bronze medal. The two teams went 0-0 in the first half, but Younis Mahmoud, an Iraqi striker, scored the winning goal in the second.

The Iraqi athletes and their national cheerleading squad showed their appreciation by clapping back to the Hanwha E&C employees after the game, according to the company.

The medal is the first in eight years for the Iraqi football team after it won silver in 2006 at the Doha Asian Games. The Iraqi national team won a gold medal in the 1982 New Delhi Asian Games. This year, the team competed against North Korea, Nepal, Japan and Kuwait.

The game was a chance for Thailand to win a bronze medal in 12 years since the 2002 Busan Asian Games. The team was included in the quarterfinals in the 2006 Doha and 2010 Guangzhou Asian Games.

Hanwha E&C said that the company earned the Iraqi government’s trust and respect with its excellent performance in local building projects.

“Despite the civil war in Iraq, we proceeded with the Bismayah New City construction without any problems,” said Lee Geun-po, Hanwha E&C president.

The company is currently building a public housing complex in Bismayah, southeast Baghdad, for 100,000 people. The project is estimated to be worth 8.5 trillion won ($8 billion).

“We will continue our efforts to win the heart of the Iraqi people,” added Lee.