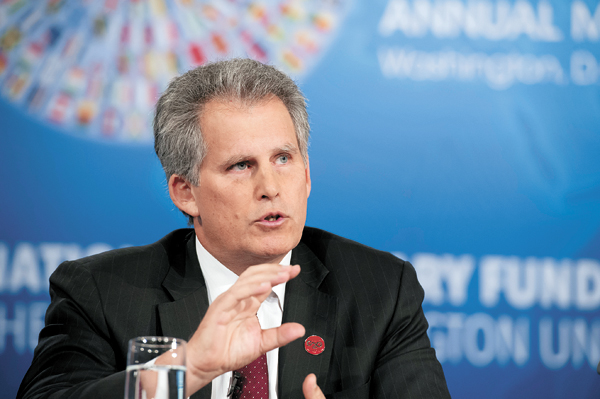 David Lipton, the First Deputy Managing Director of the International Monetary Fund, speaks at the World Bank/IMF Annual Meeting in Washington, D.C. on Sunday. Provided by the IMF

However, he called on those countries to enhance their economic fundamentals in case of an outflow of capital.

“Our principal recommendation to those countries is to make sure your country’s fundamentals are strong,” Lipton said in an interview with the Korea JoongAng Daily in his office at IMF headquarters in Washington, D.C. on Sunday.

Lipton was the first U.S. Treasury Department official to meet with the late Korean President Kim Dae-jung to discuss the IMF’s bailout program for Korea in the late 1990s when the country was hit by the Asian financial crisis.

He still has vivid memories of Kim and how severe the problem was.

“There was only around $28 billion worth of foreign reserves in Korea, and the president was fairly shocked to learn how difficult the situation was,” he said.

However, Lipton said the Kim presidency was key for Korea to make important changes to modernize its economy and engage in international finance.

As for the country’s recent economic stimulus package by Finance Minister Choi Kyung-hwan, Lipton said it is a solid policy package that has all three necessary factors - supply and demand, rebalancing and structural reforms.

Q. Due to the U.S. Fed tapering and possible early rate hikes, the U.S. dollar is forecast to appreciate in the near future. Concerns are growing among emerging countries including Korea about capital outflows. What should they do to prepare for that?

A. We do see a period coming where there is likely to be what we call “asynchronous monetary policy,” meaning that normalization of monetary policies are likely to start in the United States and the United Kingdom, while unconventional policies are likely to continue in Europe and Japan. We certainly understand that may lead to realignments in currencies and that the world does need to think about that and get ready for that. We don’t see a reason why this will be necessarily disruptive of capital flows. If the Fed’s communication is clear and its policy follows the approach that has been laid out in the communication, normalization need not be disruptive. But we recognize it may be considered to be a risk. So we believe countries need to be prepared for the possibility that volatility could return to capital markets and one manifestation of volatility may be some capital flows out of emerging market countries. Our principal recommendation to those countries is to make sure your country’s fundamentals are strong because markets are likely to differentiate, even if there were to be some changing risk sentiment.

How does the IMF view the weakening Japanese yen?

Japan has had decades of low growth and deflation. Our view is that it has been a very debilitating period for Japan. Since the beginning of the government of Prime Minister [Shinzo] Abe with the appointment of the governor of Bank of Japan [Haruhiko] Kuroda, they have designed a program, Abenomics, supported by the decision of the central bank to pursue unconventional monetary policy.

They have begun a process to pull out of low growth and deflation. We think the policy is aiming for the right policy to overcome the problems that they have. There is no question this policy mix that they have chosen has effects on exchange rates.

I would add that while many fear that the weaker yen will lead to a wave of Japanese exports undercutting other countries’ exports, that has not simply happened. Despite the weakening of the yen, exports from Japan have not risen very significantly.

Do you have any memories of the late Korean President Kim Dae-jung in 1997?

I met him two days after he was elected. It was 14 years before I came to the IMF. I was working as an Under Secretary of the Treasury [Department]. I had been there in December of 1997 during the worst days of Korea’s financial crisis, when the first Korean agreement with the IMF happened. After he was elected, the [Treasury] secretary Summers sent me back to Korea to meet with him as the first U.S. official. Because the outgoing government had not briefed the incoming president about the situation to tell him about the finances, he did not know. In particular, what we all knew, but he didn’t know, was the official reserves statistics. Because there were only $28 billion worth of reserves, he was, I believe, fairly shocked to learn how difficult the situation was.

I think in the end, that only served to strengthen his resolve and make sure everyone in Korea recognized the severity of the problems. And I will add, besides that, I never got to know the late president well personally but watching what he did from afar and what happened to Korea in the years after this crisis, to me, it’s quite clear that many important changes have been made to modernize the approach to economics and finance in a way that’s been very healthy for Korea and support of the growth and integration into international finance. I admire the accomplishments. The time of his presidency was a time of very favorable economic and financial change for Korea.

Is Korea a country that needs more fiscal measures or structural reforms?

I have listened to the deputy prime minister at the G-20 meetings and in our meetings, and have found his descriptions of his approach to policy making to be very convincing, and he clearly is supportive of strengthening growth in Korea. And he says this has both demand- and supply-side elements. He may not have said if the policies that he is suggesting would lead to some useful rebalancing as well. So I found his arguments very strong and compelling, making strong and impressive presentations. Carrying out a program that includes all three elements - demand, structural adjustment and rebalancing - for Korea is the right approach. Strengthening demand in Korea to have a stronger growth will contribute to rebalancing and will be both good for Korea and good for the region.