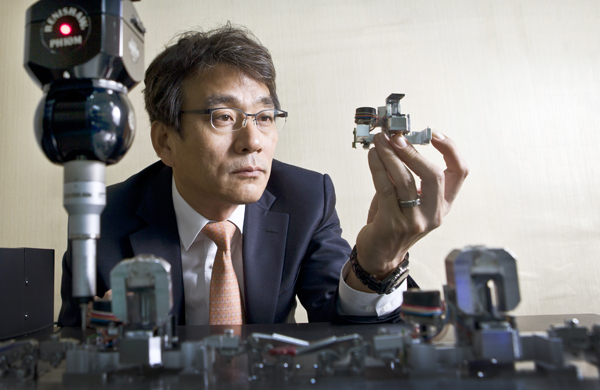 Moon Hong-yeon, founder and CEO of Robotous examines a motor actuator, a part supplied exclusively to IBM that generates significant income for the company.By Park Sang-moon

But a significant part of the company’s business includes supplying parts to IBM and producing a novel shower system.

Still, CEO and founder Moon Hong-yeon says a diversified portfolio is really “a strategy to secure enough funds to conduct research on robotics.”

Robotous, located in Seongnam, Gyeonggi, is a small company of 48 employees, but its ultimate mission lies in the robot industry, a high-end business sector that often requires a massive amount of investment with no guarantee of success. 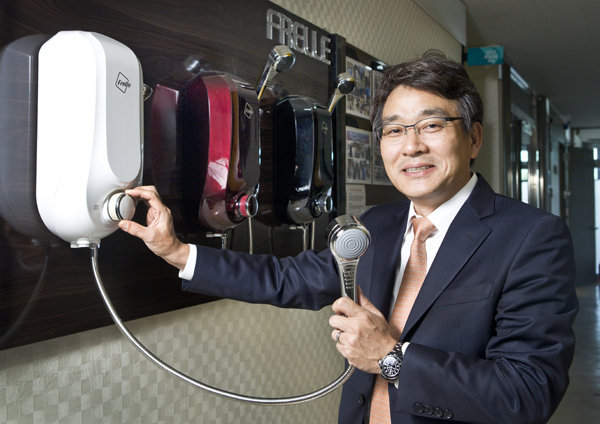 The company produces defense, security and industry robots for government and the private sector in partnership with conglomerates like Samsung.

But Moon has a more ambitious goal.

“I always want to bring robots out into public areas so that people - especially children - can see how they work and what it might be like to live their daily lives with robots,” he says. “I don’t mean some kind of an exhibition area or theme park, but more common places like cafes and restaurants, where robots can serve as cooks and servers.

“It’s hard to explain in words about my intention, but I felt someone should do the job because the development of robots can inspire people and make people dream and further pursue their goals.”

This doesn’t necessarily mean Moon is not interested in other businesses.

Ever since Robotous was established in 2004, the company has been the exclusive supplier of motor actuators to IBM. A motor actuator is a core component for recording and accessing massive amounts of information on storage devices.

Moon says the business deal with IBM took place with a little bit of luck.

“One of my friends knew people at IBM headquarters, and he took me to the company in the United States and helped me introduce the part.”

The contract was signed in 2004, the same year he established Robotous.

Prior to Robotous, he worked as a researcher at Dong A Pharmaceutical.

Along with the computer part, another Robotous product is Ferelle, a shower system using micro bubbles, which are smaller than 0.05 millimeters.

Moon says that the micro-bubble technology has multiple advantages.

“The bubbles are smaller than skin pores so they can easily penetrate and flush out other impurities missed when using regular tap water,” he says.

He notes that Dermapro Skin Science Institute found that the product significantly improves atopic dermatitis, acne and overall cleanliness of the skin.

Ferelle was introduced in a successful debut on a local TV home shopping channel, resulting in about 300 sales.

Subsequently, Ferelle made inroads in Japan, the United States, China and Singapore.

“But using it as part of a shower system was quite a novel idea. I am really proud, because once Korea was behind Japan when it came to micro-bubble technology, we now export to the country.”

The micro-bubble technology used in Ferelle is patented in 141 countries.

Before he founded Robotous, Moon tried his hand at several fields of business, but they all were technology oriented.

“I was always fascinated by any change or progress made possible by technology,” he says.

“And I believe that robotics is the maximum stage that technology can reach.”

However, Moon aspires to make more robots that interact with humans. He is keen to use haptic technology to generate virtual reality.

“We plan to launch a rest area in the next couple of years where people can play games and experience different activities using haptic technology.”

Haptic technology is a tactile technology that utilizes vibration patterns and waves to recreate the sense of touch.

“Some people say that I can make more money if I channel revenues into other forms of investment or the rental business. Then, I would rake in a lot of money more easily.

“To be honest, I sometimes regret what I’ve decided and feel totally at a loss.”

He says robotics requires long-term investment, often without direct commercial benefits, which is why it is hard for small companies to jump into the industry even if they have technology and robotics scientists.

“In Korea, robot development is led by big conglomerates like Samsung and Hyundai. The interest itself is not bad, but those big conglomerates tend to invest in the fields that promise high returns. This is why we need more diverse parties to engage in robotics.”

Hardly a day goes by without the government or a high-ranking public official making a speech about innovation, science and technology.

But Moon says that’s the problem: There is only rhetoric rather than subsidies or actual programs that provide assistance.

“After hearing what I am doing now, many think I get a lot of financial support from the government, because my business area goes in hand in hand with what the government emphasizes.

“But we don’t receive any subsidy from the government. I don’t even know if there is one.”

Moon says such a hostile environment pushed a lot of qualified robotics scientists out of Korea.

“If you look abroad, there is a whole lot of demand, especially in China.

“China now wants to be more than the factory of the world and cheap labor. The government and companies know the country has to move on from stealing technology to creating new ones.

“If I cared only about money, I would go for it,” he says., “But I know that would hurt Korea somewhat, because what Chinese companies want is core technology.”

“I think I will keep pursuing my goal while handling the businesses I run. But I think it would be good if there were a healthy environment for smaller companies willing to join robotics.”