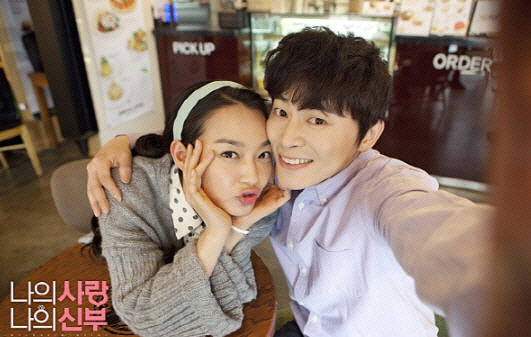 “My Love, My Bride,” a remake of a film released 24 years ago starring late actress Choi Jin-sil and Park Joong-hoon, debuted at No. 1 at the box office over the weekend. It sold 485,281 tickets, according to the Korean Film Council yesterday.

With actors Shin Min-a and Jo Jung-suk joining forces to play newlyweds Mi-young and Youn-min, the remake by director Lim Chang-sang has retained the heartrending yet pleasant atmosphere that permeates the original.

Yet the remake was given a fresh spin to make it more relatable to present-day viewers. Originally a housewife, Mi-young gets a job as an art teacher and is more independent in the modern movie.

In second place was U.S.-made fantasy feature “Dracula Untold,” which is based on the classic vampire novel “Dracula” from 1897 written by Irish writer Bram Stoker. Featuring Luke Evans and Dominic Cooper, the Hollywood blockbuster garnered 339,568 moviegoers in its opening weekend.

Two notches down from last week’s No. 1, Lim Soon-rye’s “Whistle Blower” was in third place.

The movie grabbed public attention because the film’s main storyline revolves around the infamous Hwang Woo-suk stem cell scandal that happened 10 years ago.

Domestic film “Slow Video,” starring Cha Tae-hyun, and U.S.-made film “The Maze Runner,” based on the young adult fantasy novel of the same name, were spotted in fourth and fifth place, collecting 159,318 and 155,856 viewers, respectively.

Thriller flick “Manhole” started in eighth with an audience of 48,262. Featuring Jung Kyung-ho and Jung Yu-mi, the thriller follows a relentless series of murders that take place underground inside a manhole.