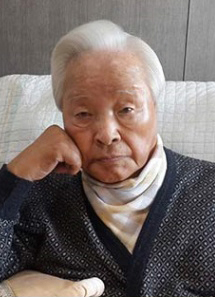 A photo of Kim Young-sam his son posted on Facebook yesterday.

He was first hospitalized with pneumonia on April 5, 2013, and was later sent to an intensive care unit due to difficulty swallowing and early symptoms of a stroke. He almost went into a coma in November.

He bounced back starting in February partly thanks to herbal medicine, said his son.

“Former President Kim made a full recovery from pneumonia and got much better after his swallowing problem and stroke symptoms,” said Kim, who is a professor at Hanyang University. “We decided to take him back home after talking to the hospital last month, and Kim is going back to his house in Sangdo-dong probably on Friday.

“We are also considering showing him leaving the hospital to the press,” Kim added.

According to Kim, the former president could hardly talk to visitors earlier, only being able to say yes or no, but has recovered enough to have conversations since August. He even jokes with his family now.

“When I told him that I repaired the house in Sangdo-dong for his return, he joked, “Aren’t you going to repair me?’” said Kim.

His secretaries brief him on political issues every day and Kim pays keen attention.

“When he stabilizes after going back home, he possibly will have interviews with the press and suggest his ideas on politics,” said Kim.

Kim Young-sam’s house, which is now equipped with a wheelchair lift and rails, was donated to the Kim Young-sam Center for Democracy in 2011.

Kim is staying in the very room of Seoul National University Hospital that he was brought to after forcibly being hospitalized by the Chun Doo Hwan junta after a 23-day hunger strike in 1983.

“He says he is deeply connected to the room because he was taken to the room after the hunger strike,” said son Kim.