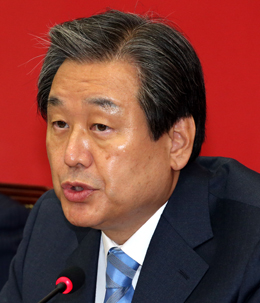 This is the first foreign visit Kim has made since taking office in July. During the trip he is scheduled to hold talks with Chinese President Xi Jinping. The party refused to confirm the exact date, citing diplomatic practice, though their meeting is likely to take place today.

China has been developing increasingly close ties with Korea over the past two years.

Those talks would mark the second one-on-one meeting between the two officials since Kim visited President Xi as a special envoy early last year ? just before President Park Geun-hye was inaugurated.

“I think the anti-corruption campaign China has been pushing ahead with ever since Xi assumed office [in November 2012] and the innovative efforts the Saenuri has been making share a common goal,” Kim said in the presence of the party’s supreme council members before his departure. “I will try to make the trip, albeit short, an opportunity for both countries to achieve reciprocal progress.”

He also mentioned the possibility of discussing the incident last week in which a Chinese fisherman was shot to death by an official from the Korean Coast Guard, which has recently been working to crack down on illegal fishing in waters off the west coast.

“The topics I will discuss [with Chinese officials] are already fixed,” he told reporters after meeting with the party’s supreme council members, “but [the death of the Chinese national] may be dealt with during the conversation. I might ask my counterpart to seek a fundamental solution that will prevent such events.”

Upon his arrival in Beijing yesterday, the Saenuri chairman visited KFTC, a small Korean auto parts producer based in the Chinese capital and met with resident Korean nationals. He also attended a banquet hosted by Kwon Young-se, the Korean ambassador to China.

Kim is scheduled to deliver a keynote speech today during policy talks between the Saenuri and the Chinese Communist Party. He is also anticipated to discuss the latest developments in inter-Korean relations, including the surprise visit earlier this month by a North Korean delegation to the closing ceremony of the Incheon Asian Games.

Kim Moon-soo, who heads the Saenuri Party’s conservatism innovation committee, is also expected to present certain concerns during the conversation.

His aides confirmed that Wang Jiarui, the director of the International Department of the Communist Party of China’s Central Committee, had personally invited the former governor of Gyeonggi. Both Kims, who are known to be close friends, are considered strong potential candidates in the next presidential election.

The Saenuri delegation is set to fly to Shanghai on Wednesday to visit Korean companies based there and meet with key officials. They will wrap up their trip the next day.

Meanwhile, the main opposition New Politics Alliance for Democracy was critical of the ruling party chairman’s trip to China and claimed that Rep. Kim Moo-sung was “abandoning” parliament amid the audit of government offices currently under way.