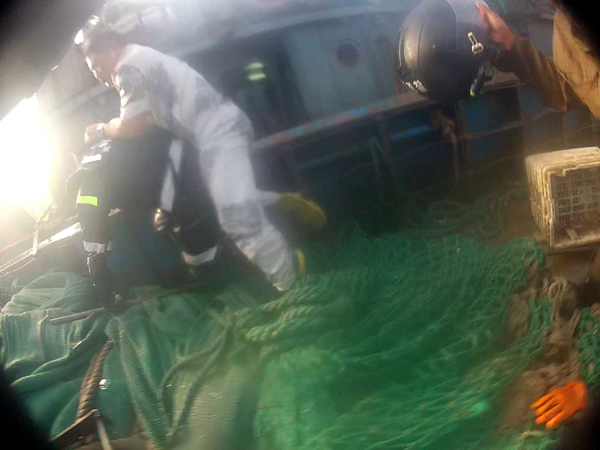 A skipper of a Chinese fishing vessel assaults a Korean Coast Guard officer Friday in video footage made public by the West Regional Headquarters of the Coast Guard on Saturday. [NEWSIS]

The Coast Guard issued arrest warrants for three Chinese fishermen yesterday for allegedly using violence against officers who approached their ship Friday when it was found fishing illegally in a maritime economic zone exclusive to Korea in the West Sea.

The three Chinese suspects are being charged with physical abuse, including threatening officers with knives and beer bottles and attempting to choke them, according to the Mokpo Coast Guard.

A Chinese skipper surnamed Song, 45, was fatally shot during the fighting, and at least five officers were injured during the struggle in waters 144 kilometers (89 miles) west of Wangdeung Island, Buan County.

All 19 Chinese fishermen from the ship are currently detained by the Mokpo Coast Guard. The remaining 16 could face similar charges if they are proven guilty in the ongoing investigation, authorities added.

After the news about Song broke last week, marking the first time a Chinese national has died from a bullet fired by a Korean Coast Guard officer, the Coast Guard released additional video footage of the raid on Saturday, hinting that the shooting was inevitable.

The Coast Guard’s rules of engagement stipulate that officers can use deadly weapons when threatened with sharp objects or in a group attack.

A corporal surnamed Kwon, who was one of 10 Coast Guard officers involved in last week’s raid, said Saturday the Chinese fisherman seen choking and kicking an officer surnamed Yoon in the roughly one minute-long video footage appeared to be Song.

“The man’s face matched that of the patient who was transported to the hospital,” Kwon said.

Song was reportedly taken to Mokpo Hankook Hospital in a helicopter after he was shot.

Scenes from the video footage show a man officers claim to be Song throttling Yoon and twisting his arms before hurling him to the ground and kicking him. Officers added that they assume Song was trying to throw Yoon into the ocean.

In response to the death, the Chinese government said on Friday it feels “appalled that a national skipper lost his life due to Korea’s violent enforcement of law.” China further demanded “stern punishment for those responsible” for the loss and urged Seoul to conduct a “thorough investigation” into the case.

After President Park Geun-hye announced she would dissolve the Coast Guard earlier this year, saying it was primarily responsible for the sunken Sewol ferry’s failed rescue operation, fears have spread that Chinese fishermen are taking advantage of increasingly lax maritime inspections.

The Korea Coast Guard conceded that their officers are struggling with an overload of work and pointed out that there are now only two teams checking for vessels fishing illegally when there were formerly three.

Lawmaker Lee Lee-jae of the ruling Saenuri Party released data from the Coast Guard in late September showing that 1,586 Chinese vessels have been busted for fishing unlawfully in Korean waters from 2011 to July this year.