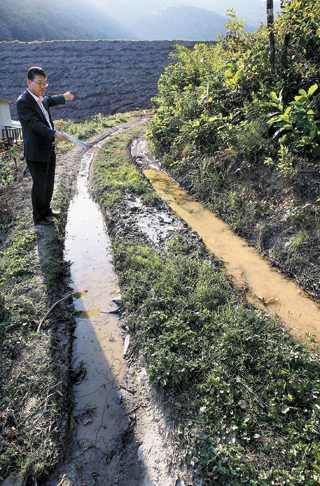 Water leaks from a weir along Goeyeon Reservoir in Yeongcheon, North Gyeongsang, forming a stream. Reconstruction is being delayed due to a lack of funds, local officials say. By Gong Jeong-sik


As municipal governments and district offices call for increased fiscal assistance from the central government in paying off soaring welfare costs, local advocates have begun raising their voices to provide momentum to push the demand through.

In recent months, local governments have gone so far as to threaten possible defaults on such programs if they do not receive more financial backing, and a recent field study by the JoongAng Ilbo suggests those calls might be right.

An Jong-seok, a senior researcher at the Korea Institute of Public Finance, pointed to the fact that the quality of Korea’s “core curriculum educational services” - which, he said, also affects the essence of lesson plans - lag behind other countries of similar economic standing.

The reason, An stressed, is because current welfare policies place too much focus on “peripheral” matters that aren’t considered vital in raising the quality of education.

The government is “leaning toward collateral welfare services like school meals” rather than paying more attention to “more essential factors like teachers’ salary, school environment and class materials,” he said.

Since 2011, a number of free education and welfare policies have been touted by aspiring politicians and city officials, such as the free public school lunch program and the free day care system for 3- to 5-year-olds.

The initial triumph, however, did not last long, and the central government has already partially withdrawn plans to provide financial support to municipal governments in carrying out those new policies. Earlier this year, the Ministry of Education announced it would no longer back up the free day care programs for preschool-aged children.

Local governments’ combined debt surpassed 100 trillion won ($93.575 billion) for the first time in 2012, and more than half of local government offices ­­- 127 out of 244 - say they are unable to pay their employees without support from the central government.

“Free lunch for all students, including those from the high-income bracket is, in fact, a privilege for the rich,” said Lee Young, an economics and finance professor at Hanyang University.

Suncheon City Mayor Cho Choong-hon stated last month at a press conference in Seoul that local government offices were “deeply troubled financially, to the extent that they can’t execute basic administrative affairs” and repairs. Cho’s arguments were detailed in a statement issued by 226 local government chiefs.

A group of reporters from the JoongAng Ilbo recently headed out the Seoul metropolitan area and its districts to examine more closely what Cho had described as dire.

In Yeongcheon, North Gyeongsang, water was found to be leaking from cracks in the weir constructed along Goeyeon Reservoir. The artificial reservoir was built in 1945, but has yet to be repaired or reconstructed, due in part to a lack of funds to carry out the project.

In late August, some 20 houses in the city were submerged after part of the weir had toppled. Luckily, however, the city was able to warn residents and no lives were endangered.

“It’s urgent to repair the weirs along the reservoirs,” said Han Yoon-joon, an officer at the North Gyeongsang government in charge of rural development. “But it’s hard to collect the required budget when welfare expenses are on such a sharp rise.”

Further down in Ulsan, South Gyeongsang, the city was facing difficulties widening its roads, and several roads in Jung District were so narrow that fire trucks had a hard time just passing through.

Local officials say there are more than 100 roads in the district area that need to be widened, yet only five will be reconstructed this year due to a lack of funds.