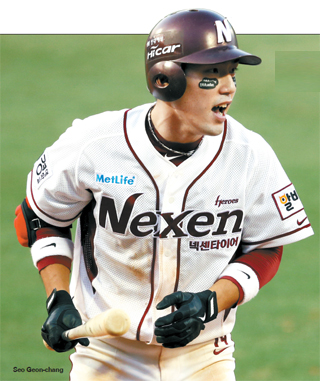 Seo Geon-chang of the Nexen Heroes is closing in on the unthinkable: 200 hits in a 128-game Korea Baseball Organization season.

On Monday, Seo got his 197th hit in Nexen’s 125th game, an 8-5 win over the KIA Tigers, to break the KBO record of 196 hits in a season set by Lee Jong-beom in 1994. Going into last night’s game against the Lotte Giants in Busan, Seo had three more games to get three more hits and make KBO history.

It’s hard to believe that the player threatening to become the KBO’s first 200-hit man was released from his initial professional team because he was too small. This season, the 5-foot-9 infielder got even smaller as he adjusted his batting stance by crouching and lowering his hands to his belly.

In Japan, where professional teams play 144 games per season, the 200-hit mark has been reached only six times. In the 162-game Major League Baseball season, only two players - Jose Altuve (225) of the Houston Astros and Michael Brantley (200) of the Cleveland Indians - had 200 or more hits in 2014. Last year, no one did.

When Seo reached 100 hits in only 64 games on June 24, faster than any player in KBO history, analysts doubted he could maintain that pace for an entire season. Aside from slumps and on-field injuries, there is always the unexpected. Previous record-holder Lee Jong-beom lost his chance at 200 hits in 2004 due to a last-minute case of food poisoning.

When Seo graduated from Gwangju Jeil High School, he wasn’t drafted by any professional team. In 2008, he chose to join the LG Twins as a trainee, someone who is not officially registered with the Korea Baseball Organization. He batted only once that year, striking out against Nexen’s Song Sin-yeong.

Seo was released after a year in the LG organization. He applied for the Korean Police Baseball Team to replace his compulsory military service and failed, then joined the Army.

After finishing military service in 2011, he was accepted as a trainee by the Heroes. The following year, he broke into the Nexen lineup as a second baseman and played 127 games en route to being named Rookie of the Year with a .266 batting average.

In 2014, Seo learned that titles sometimes don’t mean much in professional baseball, enduring an average season at the plate and playing in only 86 games.

That was when Seo decided to change his swing from the typical hands at shoulder level.

“I tried to relax as much as possible to hit the ball precisely with a shortened swing,” said Seo.

So he lowered his hands.

After the adjustment, the arc of his backswing was shortened to less than 1.5 feet, but that meant he could focus on the ball longer.

One problem was that he could not hit the ball hard enough, so he spent last winter in intensive weight training. This summer, he has reaped the reward.

Other players now imitate his technique, though it is not easy. At last, Seo’s long and determined efforts to gain the respect of his teammates seem to have paid off.

There is no doubt that Professor Seo deserves the nickname given to him by fans.