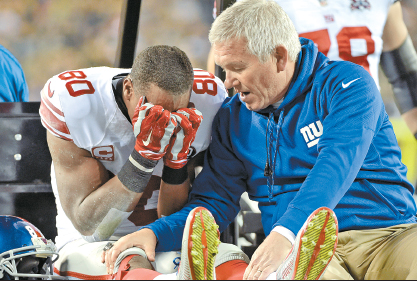 New York Giants wide receiver Victor Cruz, with trainer Byron Hansen, is carted off the field after an injury during the third quarter against the Philadelphia Eagles at Lincoln Financial Field. [USA TODAY/NEWS1]

Overcome with emotion, his hands in front of his eyes as the tears flowed, Victor Cruz couldn’t hide his pain.

The patellar tendon the New York Giants wide receiver tore in his right knee in the third quarter of Sunday night’s 27-0 loss to the Philadelphia Eagles left him crying as he was carted off the field next to trainer Byron Hansen.

The best his teammates and Eagles players could do was tap him on the shoulder in support as he left the field. It’s the second straight year the 27-year-old Cruz had his season ended early by a knee injury. He had surgery on his left knee in December after being hurt against Seattle.

This one seemed far more serious for the fan favorite who entertains Giants faithful with salsa dances after catching touchdowns.

Coach Tom Coughlin said Monday that Cruz, who had 23 receptions for 337 yards, a touchdown and a team-high 14.7 yard average, will need surgery. The coach did not know when the surgery would be performed or the length of the rehabilitation.

“Certainly there was a lot of pain and he is going to have to go through a lot to get back to where he was,’’ Coughlin said of the former free agent who emerged as the Giants’ big playmaker. “He has been challenged his whole life and I don’t see him backing down from any challenge whatsoever. He is an outstanding contributor to our team in a lot of ways, one of which was on the field and the other was what he meant in the locker room. We will miss all those things.’’

Cruz was injured on a non-contact play. The fifth-year veteran, a captain this season, tried to make a leaping catch of a fourth-down pass in the end zone with the Giants trailing 20-0. He jumped and almost immediately grabbed his knee and fell to the turf, where he lay for about five minutes.

Coughlin did not indicate who would replace Cruz as the Giants (3-3) head to Dallas (5-1).

It is obvious that first-round draft pick Odell Beckham Jr. will get more playing time. He might even move into the slot position Cruz played in three-receiver formations.

Quarterback Eli Manning sent Cruz a text message after the game, but he had not heard back from his teammate, who was a Pro Bowl pick in 2012. He said Beckham, Rueben Randle and Preston Parker have to step up and fill the void.

“You just hate that it happened to Victor because he loves playing this game,’’ Manning said. “He loves the practices. He loves competing, making plays, he is such a team player and leader in the locker room. He has a great attitude toward the game of football, and so to see him get injured and be out for the season, I feel for him.’’

Veteran defensive end Mathias Kiwanuka said players realize injuries happen and the best thing they can do is continue to play hard.

“On the very next play you just want to go out and give it everything you got and use that as a reminder that you don’t know how much time you have to play this game,’’ Kiwanuka said.

Cruz spent Sunday night at Jefferson Hospital in Philadelphia. He was transferred on Monday to the Hospital for Special Surgery. AP