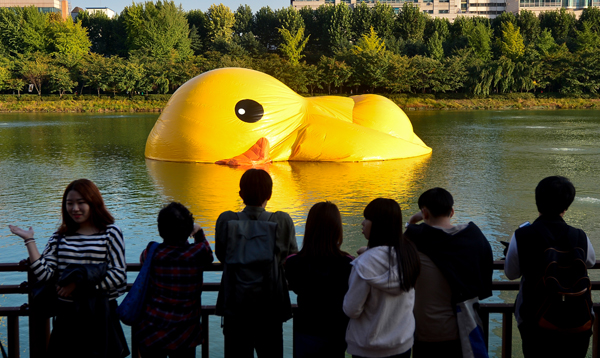 People take pictures of a giant yellow rubber duck that deflated while floating in Seokchon Lake, southeastern Seoul, yesterday. The organizers of the Rubber Duck project in Korea said that the art installation would be soon be pumped up again. The large Rubber Duck, created by Dutch artist Florentijn Hofman, is on display in Seoul until Nov. 14. [NEWS1]


A gigantic rubber duck deflated on Seokchon Lake in Jamsil District, southeastern Seoul, yesterday, the day it was placed in the water.

Koo Hye-Jin, the director in charge of the project that brought the Rubber Duck to Korea, said the famous installation by artist Florentijn Hofman would be reinflated by last night.

Since 2007, versions of the giant duck have been on display more than 20 times in 16 countries.

Lotte Group, the project’s sponsor, chose an area near its new mall, a construction that has come under fire for allegedly causing sinkholes nearby, to display the duck. This had led to some criticism that the retailer is running the project to divert attention from the controversy.

When asked why Lotte had selected the location, Koo said, “Seokchon Lake was selected for its perfect view.”

According to Hofman on his website, “The Rubber Duck knows no frontiers, it doesn’t discriminate people and doesn’t have a political connotation.”

The artist added that he hoped the duck could give Koreans an opportunity to “share joy and hope together” after the Sewol ferry disaster.