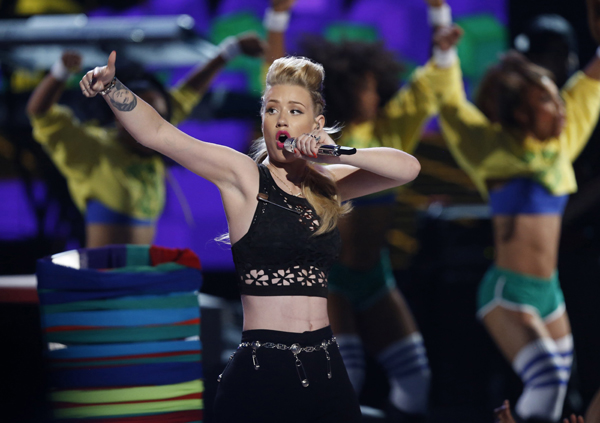 NEW YORK - Australian rapper Iggy Azalea scored the most American Music Award nominations with six nods, including the coveted artist of the year and favorite single and hip-hop album, according to an announcement on Monday.

Singers John Legend and Pharrell Williams and pop star Katy Perry were not far behind with five nominations, followed by New Zealand’s Lorde with four.

Charli XCX will also perform at the three-hour awards ceremony for the first time. The Nov. 23 show will be broadcast live from the Nokia Theater in Los Angeles.

The American Music Awards nominees and winners are chosen by the public, who vote online and via Twitter.

Azalea will vie with Perry, Williams, Lorde, Legend and Beyonce for artist of the year, a category that has been increased from five to 10 nominees this year.

The 10 artist of the year nominees will be whittled down to five based on fan votes received through Nov. 13, with the winner selected from the total number of ballots submitted during the voting period.

Azalea’s “Fancy,” featuring Charli XCX, is up for single of the year, a category whose nominees have increased from three to five this year, along with Legend’s “All of Me”; Perry’s “Dark Horse,” featuring Juicy J; Williams’ “Happy”; and “Rude” by the group Magic.