Kim Jong-un limps out of seclusion

Kim Jong-un limps out of seclusion 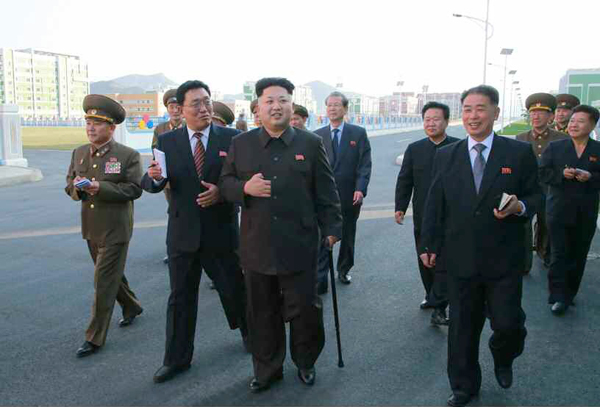 North Korean leader Kim Jong-un walks with a cane during an inspection of a newly completed apartment complex for scientists in this undated photo carried by the North’s Rodong Shinmun yesterday. The report on Kim’s public activity ended rampant speculation about his 40-day disappearance. [NEWS1]

North Korean leader Kim Jong-un returned to public activity and the public eye, healthy if limping, putting an end to global speculation about a 40-day disappearance, his physical condition and cheese-eating habits, and his control over the regime.

The North’s state-run media reported yesterday that Kim visited a newly built apartment complex for scientists and the Natural Energy Institute of the State Academy of Sciences. According to the Korean Central News Agency, the apartments were built on the order of Kim and were completed last Friday, the 69th anniversary of the founding of the ruling Workers’ Party.

Photos featured in yesterday’s edition of the Rodong Shinmun showed Kim using a cane. The mouthpiece of the ruling Workers’ Party ran prominent reports about Kim’s on-site inspections on its front, second and third pages.

While North Korean media did not disclose when the site inspections took place, South Korean authorities said Kim likely visited the complex on Monday. It is customary for the North’s media to report Kim’s activities on the following day.

Yesterday’s reports put an end to relentless, largely baseless rumors about Kim’s mysterious disappearance. He made his last public appearance on Sept. 3.

North Korean media later admitted that he was in “discomfort” without elaborating further.

Seoul officials have consistently dismissed rumors that the North Korean leadership was experiencing major problems. The latest dismissal came at the National Assembly hearing on Monday when Choi Yoon-hee, chairman of the Joint Chiefs of Staff, told lawmakers that Kim’s health issue, whatever it might be, was not serious enough to hinder his rule of the country.

It is rare for the North to make public a less-than-perfect portrait of its supreme leader because the country relies so heavily on the personality cult of the Kim dynasty. North Korea watchers said Pyongyang was apparently in a hurry to prove its stability.

“Kim probably wanted to dispel rumors that he was seriously ill or he had fallen from power,” said a senior South Korean official, adding that to his knowledge, it was unprecedented for Pyongyang to release photos of a top North Korean leader with health aids like a cane.
Choosing the scientists’ housing complex for his reappearance also sent a message, the Seoul official said.

“It was to stress Kim’s policy of simultaneously pushing forward on two fronts, the economy and nuclear weapons,” he said. “Because Kim proposed the construction of the apartments and the outcome was satisfactory, he probably chose that place for his comeback.”

The two-front policy to develop the North’s economy and nuclear capability was adopted by the Workers’ Party’s Central Committee in March 2012, shortly after Kim took power.

The housing complex was built to accommodate scientists who participated in the North’s missile and nuclear programs.

“We built this complex not to show off our architectural ability, but to allow the scientists to devote themselves to their research and projects,” Kim was quoted as saying in the KCNA report.

The news reports said top military and party officials accompanied Kim. Vice Marshal Hwang Pyong-so, director of the General Political Bureau of the Army, and Choe Ryong-hae, secretary of the Workers’ Party Central Committee, who visited the South in a surprise trip earlier this month, were in the entourage.

Kim was believed to be 170 to 172 centimeters tall (about 5-foot-6) and to weigh about 120 to 130 kilograms (about 264 to 286 pounds) based on an analysis of the photos released earlier this year before his mysterious disappearance. In 2010, he was believed to weigh about 90 kilograms. Analysts say the young leader gained weight quickly, perhaps to further his resemblance to his late grandfather, North Korean founder Kim Il Sung.

After analyzing the latest photos, medical experts in Seoul said Kim appeared to have lost some weight while his face and wrists were swollen. He held the cane with his left hand.

“His ankle could have been troubled because of the weight,” said Prof. Lee Jin-woo, an orthopedic surgeon at Yonsei University’s Severance Hospital. “If he is using the cane on the left side, he is rehabilitating from surgery on his right ankle or leg.

“If weight is the issue, both ankles would have been troubled, but he probably got the surgery on one side first for easier rehabilitation,” Lee said. “Normally it takes three months to recover, but he was seen in public after 40 days, so he probably needs to rest more.”

While some speculated that his swollen face might indicate that Kim has a kidney condition, doctors said he didn’t appear to have a serious illness.

“Despite various speculations, Kim appeared to be relatively healthy,” said Dr. Han In-kwon, a former professor at Sungkyunkwan University’s School of Medicine. “But taking into account the family history of cardiac diseases and his smoking and drinking habits, there is still a possibility that he may suffer various complications from obesity.”

It was not the first time that the North’s leader disappeared from the public eye. In 2008, Kim Jong-il, Kim Jong-un’s late father, had no public activity from August to November, prompting rumors that he had suffered a stroke. When he reappeared, he appeared to have difficulty moving his hand and leg, supporting the suspicion.