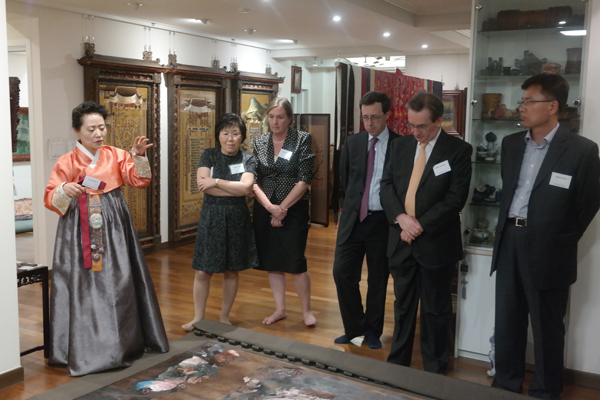 Son In-sook, left, an embroidery artist, explains her artworks to visitors at her house yesterday. Her guests included Choi Chung-hwa, second from left, director of the Corea Image Communication Institute, and Jerome Pasquier, second from right, French ambassador to Korea. Son’s works will be shown at the Guimet Museum in Paris next year. Provided by the CICI

Son In-sook is an embroidery artisan.

But she refuses to call her works “embroidery,” instead preferring the term silgrim, which means “thread art” in Korean.

This is Son’s way of extending the boundaries of embroidery, which is traditionally seen in Korea as a craft women undertook to make items for the home. In other words, Son is imbuing embroidery - which used to be a household chore or even labor - with a new identity.

“For me, the needle is the brush and the thread is the paint, and with the two I can create anything that inspires me,” Son, 63, told the Korea JoongAng Daily on Tuesday. “There are no limitations in silgrim.” 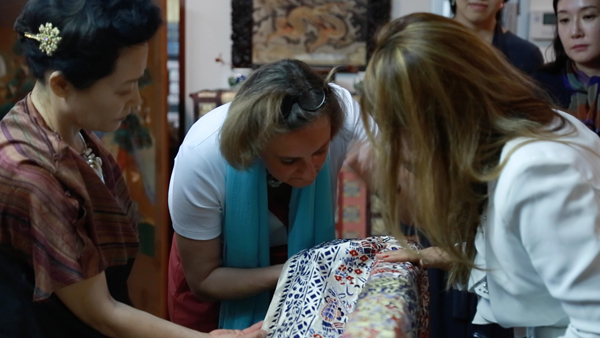 During the interview, Son stood in her apartment in Gaepo-dong, southern Seoul, in front of a set of three traditional Korean closets - one with three compartments, another with two and the other with one - all covered in splendid, glittery embroidery.

Son’s home is filled with about 200 works, in addition to traditional furniture and craft items that she has collected over the years. And even more impressive, she has three more apartments in Seoul and the nearby Gyeonggi area that are equally full of art and relics.

Next year, Son’s art will be presented in France. As Korea and France mark the 130th anniversary of diplomatic relations, Son will hold a solo exhibition at the Guimet Museum in Paris next October. The museum is known to have one of the largest collections of Asian art outside of Asia.

“It’s like an Impressionist painting,” said Jerome Pasquier, the French ambassador to Korea, as he was looking at Son’s embroidered folding screen that depicts the four seasons.

“It’s interesting because she’s using a traditional method, but there is also a modern [touch in her works].”

The artisan explained the meaning behind several of her artworks as well as her thoughts and vision of embroidery to her guests.

Some of Son’s pieces include “Portrait of a Beauty” by Shin Yun-bok (1758-unknown), one of the most important artists of the late Joseon era; a folding screen depicting royal ceremonies of the Joseon Dynasty (1392-1910); and a large bridal gown.

The highlight, however, is a replica of the famous 14th-century Goryeo era Buddhist painting “Willow-Branch Avalokitesvara,” which is currently kept in Japan. Son made two versions, one reflecting the piece’s current state, where the paint is peeling here and there, and another in a perfect state.

Son, whose grandmother and mother were all embroidery artisans, said she decided to follow in their footsteps at age 10.

“It’s an honor to present my works at the Guimet Museum,” Son said. “As more and more people in today’s society are shunning from time-consuming works like embroidery, I feel that it’s my duty to show my works to more people and introduce the culture of embroidery to the future generation.”

The pieces that will be presented at the Guimet Museum will be decided later, Son added.