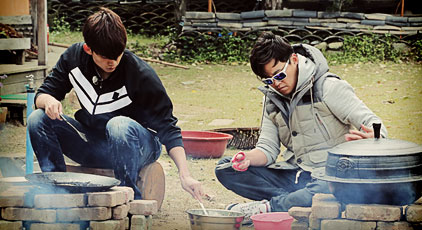 In a still from “Three Meals a Day,” Ok Taecyeon, left, and Lee Seo-jin cook using a huge iron cauldron for their new reality TV show. The program is a second collaboration between Lee and star producer Na Young-seok, who created the “Grandpas over Flowers” series.

“Three Meals a Day,” the newest collaboration between “Grandpas over Flowers” cast member Lee Seo-jin and its producer, Na Young-seok, is sure to appeal to many viewers.

In contrast to his role as a grumpy tour guide escorting a group of senior actors in their 70s around Europe in the candid reality show, Lee will be one of two good-looking city boys forced to survive in rural Korea with cameras in tow.

Along with singer and actor Ok Taecyeon, actor Lee adapts to life in Jeongseon, Gangwon, where the two will have to feed themselves with only home-grown vegetables cooked with man-powered tools.

The production team of the new show held a press event yesterday in Yeouido, western Seoul, prior to airing the show. 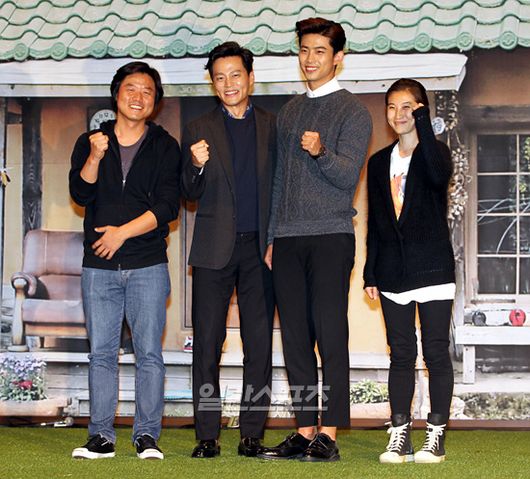 Producer Na and the two actors participated in the event and shared some details about what viewers can expect.

Ok is a member of the boy group 2PM but has recently been seeking to get into acting.

Lee and Ok appeared in the same drama series as brothers earlier this year.

“The Grandpas series was a long project,” said Na. “It took me more than two years from the inception of the show until its end.”

Na is currently a star producer in Korea. His name is often used as a surefire way of attracting viewers to a show, especially people in their 20s, 30s and 40s.

“I just wanted to work on a lighthearted show that can highlight the small pleasures of life,” said Na, “and the premise of the show is pretty simple. I wanted to talk about a meal that is made with vegetables from my garden and have these two guys share their homely foods with their friends.

“The main concept is that it is a cooking show but with no mouth-watering foods because these two guys can’t cook.”

Na said the new show was inspired by Lee after he saw that the actor was terrible at cooking during the filming of “Grandpas.”

Lee had to whip up occasional Korean dishes for the grandpas in his hotel room while traveling around Europe.

But since he knows nothing about preparing food, according to Na, he complained continuously while he was cooking that the producer had forced him to do it.

Although Na said that there are no crises or dramatic moments in his new program, it seems like it will have plenty of catchy elements to keep the audience hooked.

“Each week, we have guests from Seoul, and then we have to serve them,” said Lee. “But we have nothing other than vegetables and rice. Then we earn meat from the production team. In return for that, we have to harvest a huge amount of sorghum [a type of grain] in front of the house. We’re living like slaves.”

Ok, who went to college in the United States, just like Lee, also complained about life in the country.

“All I want is a set of pots. We cook everything using a huge gamasot [a huge iron cauldron], but it is way too heavy, even for me,” said the 26-year-old well-built entertainer.

“The pot itself weighs more than 10 kilograms [22 pounds] and when it contains food, the weight goes beyond 15 kilograms.”

With use of the cauldron, the two men even make homemade ricotta cheese from the milk of Jackson, a goat they raise, for their first guests.

For the visitors, they also grind coffee beans using a maetdol, or a stone food grinder that has been in use since ancient times. The maetdol is a multipurpose grinder, used for breaking down everything from peppers to coffee beans.

Along with Jackson, the milky white goat, Lee and Ok live with five hens and a white pooch on the show.

The first episode of “Three Meals a Day” will hit TV screens on Friday at 9:50 p.m. on tvN.