More Royals’ treatment has Orioles on the ropes

More Royals’ treatment has Orioles on the ropes 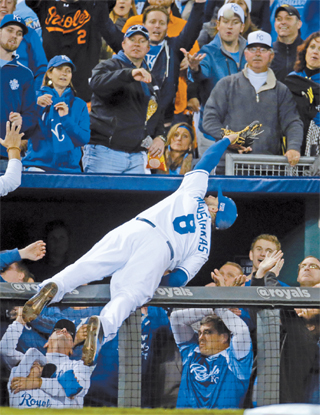 Royals third baseman Mike Moustakas sails over the railing to make the catch on a ball hit by Adam Jones of the Baltimore Orioles in the sixth inning of Game 3 of the AL Championship Series on Tuesday in Kansas City. [AP/NEWSIS]

In a perfect postseason for the Kansas City Royals, Mike Moustakas - of course - made that daring catch look so seamless.

Boosted by more sparkling defense, a dominant bullpen and another dose of small ball, suddenly the wild-card Royals are one win from the World Series.

Billy Butler drove in the go-ahead run with a sacrifice fly in the sixth inning, and the Royals’ steel-curtain relief corps shut down the Baltimore Orioles the rest of the way for a 2-1 win Tuesday night and a commanding 3-0 lead in the AL Championship Series.

Moustakas made two marvelous plays at third base as Kansas City won its 10th straight postseason game, including all seven this year. With the Royals making their first playoff appearance in 29 years, the only thing that’s slowed them so far was a rainout Monday.

The Royals will send Jason Vargas to the mound for Game 4 on Wednesday local time, trying to advance to their first World Series since 1985. Miguel Gonzalez will try to help the Orioles stave off elimination.

Of the previous 33 teams to trail 3-0 in a major league postseason series, only Boston in the 2004 ALCS against the Yankees rallied to win.

Smooth with their gloves all season, the Royals flashed even more leather to stop the Orioles.

Moustakas made a diving grab to rob Steve Pearce of a single in the fourth.

In the sixth, Moustakas tracked a popup by Adam Jones into foul territory, steadied himself at a railing near the dugout, then extended himself to catch the ball and tumbled into the stands.

“I was trying to find the fence, and I saw it was going to be a little out of my reach, so I crawled over and reached and caught it, and the people in dugout suite picked me up and kind of helped me,’’ said Moustakas. “It was pretty cool. A lot of credit goes to those people over there for not letting me fall and hurt myself.’’

The blue-clad crowd rose to its feet to give Moustakas a rousing cheer, and many fans were still standing when Butler drove in the go-ahead run in the bottom half of the inning.

The Royals’ Jeremy Guthrie and Orioles’ Wei-Yin Chen hooked up in a tense pitching duel for five innings.

Chen gave up a leadoff single to Nori Aoki in the sixth. Eric Hosmer followed with a one-out single to put runners on the corners, and Orioles Manager Buck Showalter brought in hard-throwing reliever Kevin Gausman to face Butler.

The Royals’ designated hitter sent a fly ball to left field for the tiebreaking run in the latest example of Kansas City doing the little things right.

One of the best bullpens in baseball took care of the rest - the relievers combined with Guthrie to retire Baltimore’s final 16 batters.

After winning pitcher Jason Frasor breezed through the sixth, Kelvin Herrera and Wade Davis nailed down the next two innings. All-Star closer Greg Holland worked a perfect ninth for his third save of the series, setting off a wild celebration in the stands.

It was the 13th game to be decided by one run this postseason, matching the record set in 2011 and tied last year. Six games have gone to extra innings, including the Giants’ 5-4, 10-inning victory over the Cardinals hours earlier in the NLCS.

After failing to take the lead in the first two games of the series, Baltimore managed to strike first, temporarily silencing a frigid, flag-waving crowd.

It happened in the second inning, when Pearce and J.J. Hardy connected off Guthrie with back-to-back doubles for a 1-0 lead. Ryan Flaherty later drew a walk, but Guthrie retired Nick Hundley and Jonathan Schoop to escape his biggest jam of the night.

Guthrie wound up grinding through five innings against his former team, allowing just one more.

Chen matched him pitch-for-pitch until the fourth, when the Royals put together one of their quintessential innings: a pair of bloop singles by Lorenzo Cain and Hosmer, a walk by Butler, and an RBI groundout by Alex Gordon that tied the game.

In San Francisco, the Giants took a 2-1 lead with a 5-4 victory over the St. Louis Cardinals in the National League Championship Series.

Cardinals reliever Randy Choate’s wild throw to first base after fielding a bunt allowed the inning run to score in the bottom of the 10th inning. AP