Sarkozy sees prime role for Koreas in the future

Sarkozy sees prime role for Koreas in the future 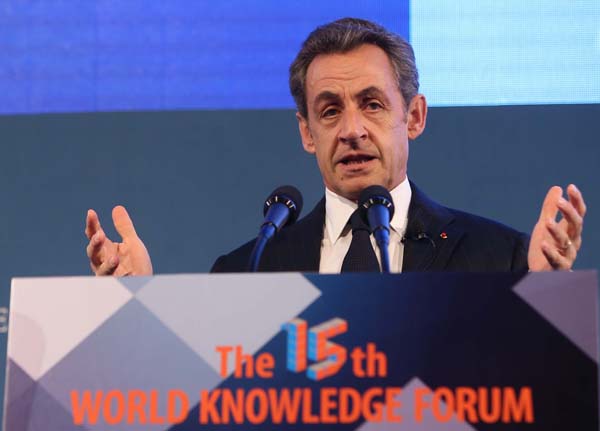 Former French President Nicolas Sarkozy proposed yesterday that Asia establish a regional group like the European Union to curb potential conflict amid a persistent power struggle between China and Japan, and said a unified Korea should play a crucial role in it in the near future.

The ex-French leader, who left the Elysee Palace two years ago and is now practicing law, delivered a keynote speech at the 15th World Knowledge Forum in Seoul.

Sarkozy said that the only solution to coping with intensifying competition among Asian countries for power - between China and Japan, in particular - is forming a new group that includes each country and its people. The group would seek resolutions to prevent potential conflicts, he said.

He stressed that Korea is in a nice position to take a leadership role within Asia given the potential of unification.

“The two Koreas will eventually be unified - which is only a matter of time - in an unthinkable way within an instant,” he said through a French-Korean simultaneous interpretation, “and the combined population of up to 70 million will make Korea play a central role.”

There have been wars between France, Germany, Britain and Spain until very recently - in the 20th century - and when powerful countries are placed in certain circumstance, they have no choice but to fight each other, he said. The only solution was creating the European Union, which has finally brought peace to the European continent.

“The EU countries are aware that the demolition of the European Union will only lead to war,” said the 59-year-old, who chaired both the Group of 20 and Group of 8 summits as president.

He allocated a sizable portion of his speech and subsequent dialogue with the forum’s host, Maekyung Media Group Chairman Chang Dae-hwan, to China. China’s emergence is an “inevitable reality” that the world faces and the Korean economy is already too reliant on China. Should any problem occur with the neighboring country tomorrow, it would cause a huge problem for Korea. China’s relentless growth may be problematic but it would be even worse if anything bad happened with the country, Sarkozy noted.

He joked about the claim by Thomas Piketty, French author of the best seller “Capital in the Twenty-first Century” and professor of economics at the Paris School of Economics, that the rich should be taxed more heavily.

“The problem with France is that it would export something that won’t work domestically,” he said. “He [Piketty] is great but is a Communist and satisfying everyone is difficult. Unless you are Bill Gates or Steve Jobs, no one would love to pay more taxes.”

Hefty taxes on capital would only decrease investment and tax issues are already causing a lot of problems in France, he added.

“Whereas I am a pragmatist who prioritizes creation of wealth, academics [like Piketty] think how wealth is created is more important.”

Speculation has been rife recently that Sarkozy aims to return to the Elysee Palace by running in the 2017 presidential election as Francois Hollande is now the most unpopular president in French history.

He commented yesterday that it “does not seem necessary to bring up the presidential election at this moment.”