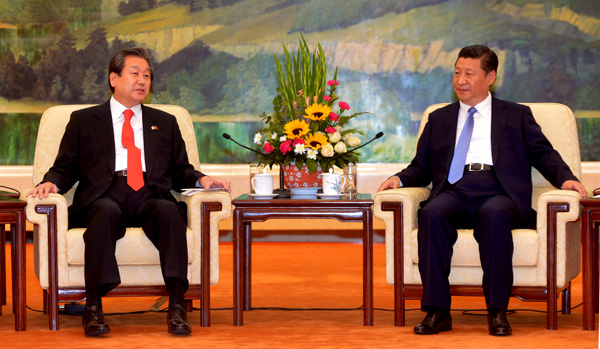 Kim Moo-sung, left, the chairman of the ruling Saenuri Party, holds talks with Chinese President Xi Jinping yesterday at the Great Hall of the People in Beijing. Kim is on an official four-day visit to China. [NEWSIS]

In a meeting yesterday with ruling Saenuri Party Chairman Kim Moo-sung, Chinese President Xi Jinping suggested that the six-party talks should be resumed, saying that it was the best framework for proceeding with the peace process on the Korean Peninsula.

“The Korean Peninsula issue cannot be resolved alone,” Xi was quoted by Rep. Kim as saying.

The six-party talks among the two Koreas, the United States, Russia, Japan and China, which aim to find an appropriate resolution to the concerns surrounding North Korea’s nuclear program, last took place in December 2008.

Kim met with Xi in Beijing yesterday, the second day of his four-day stay in China, where he also expressed admiration for the nationwide drive to fight corruption.

The meeting, which began around 5 p.m. local time, lasted longer than expected, making many of the details of the meeting unavailable at press time. The ruling party chairman praised Xi’s anti-corruption campaign, calling it a “very timely agenda” during a policy talk earlier in the day between Korea’s Saenuri Party and China’s Communist Party, which invited him and some dozen Saenuri lawmakers to the country.

“The anti-graft campaign in Singapore and Hong Kong during the 1970s prompted economic growth, and Korea was no exception,” Rep. Kim said in an opening address. “I hope that Korea and China can seek constructive measures so that anti-corruption and the rule of law take root.”

The Korean lawmaker noted that President Xi’s policies have received much respect and commendation among Koreans, too.

“That eliminating the three privileges afforded to Chinese officials - official vehicles, entertainment expenses and business trip fees - led to savings of a whopping 53 billion yuan ($9 billion) over the past year is a great accomplishment,” Rep. Kim said, adding that China’s drive to fight corruption under Xi and the Communist Party’s leadership is an exemplary case.

In a morning meeting with Wang Jiarui, the director of the International Department of the Communist Party of China’s Central Committee, the Saenuri leader said that stabilizing security in Northeast Asia is crucial for widening cooperation between Korea and China, though he added that resolving the North Korean nuclear issue should come first.

Meanwhile, Kim Moon-soo, the former governor of Gyeonggi, proposed in policy talks between the Saenuri and the Communist Party earlier in the day that both parties should jointly build an “anti-corruption solidarity group” to routinely share experiences and knowledge related to anti-corruption, and come up with measures to better exercise it.

Introducing the Saenuri Party’s special committee for conservatism innovation that he chairs, the former governor said that he had flown economy rather than taking business class on his way to Beijing.

The downgrade is part of the party’s aim to “unload” politicians’ privileges.