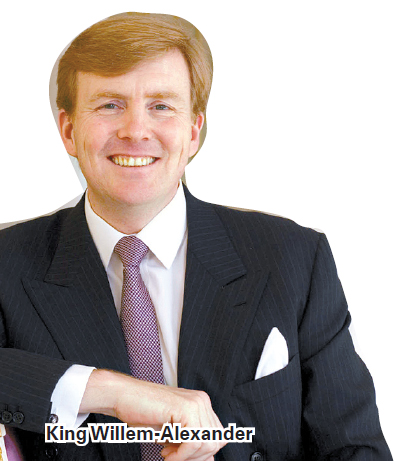 Ahead his state visit to Seoul next month, Dutch King Willem-Alexander last week expressed his admiration for the “forward-looking focus” of the Korean people.

His visit to the Peninsula will be the first official trip by a Dutch monarch.

“I have been in Korea several times, and I’ve always enjoyed the spirit of the Korean people and admired their forward-looking focus,” he said in a meeting with Korean media, including JTBC, on Oct. 8 at the Noordeinde Palace in The Hague.

The king added that he has always been “impressed” by what the country has achieved since the 1950-53 Korean War and the role it has played regionally and globally. President Park Geun-hye visited the Netherlands during her trip to Europe in March.

King Willem-Alexander and his wife, Queen Maxima, will visit Seoul on Nov. 3 and 4, upon the president’s invitation, where they are scheduled to visit a number of attractions, including the Dongdaemun Design Plaza. The two nations are also expected to expand economic cooperation.

The king, who ascended the throne in April 2013, previously visited Korea four times as a crown prince. He was particularly laudatory of Korea’s successful bid for the 2018 Olympic Winter Games to be hosted in Pyeongchang, having served as a member of the International Olympic Committee (IOC) from 1998 to 2013.

In regard to the upcoming Winter Olympics, he recalled his visit to Pyeongchang in 2003, while on an evaluation committee, and said he was “incredibly impressed,” even back then.

He added that the country was very “involved” and always “listened to comments and suggestions.” These were factors, he continued, that contributed to why Korea’s third consecutive bid this time was a success.

He chose Korea for a state visit, he said, because it is a strategic partner with good bilateral ties dating back more than 50 years, and because a trip to the country would be symbolic “to further enhance these ties.”

The king also spoke of the special bond that the Netherlands shared with Korea, recalling “Hamel’s Journal,” the account of Dutch explorer Hendrik Hamel, who was shipwrecked on Jeju Island in the 17th century. Hamel is often considered to have been the first to introduce Korea to the Western world through accounts of his experiences on the peninsula.

“My wife and I are very much looking forward to the upcoming state visit, to seal and enhance the good cooperation between our countries,” King Willem-Alexander said.