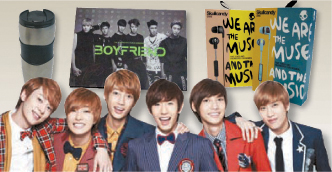 The boy band Boyfriend sent in a tumbler, a CD and two pairs of earphones.

More donations for the Joongang Media Network’s 10th annual WeAJa flea market on Sunday continued to pour in last week from all corners of society.

And when it comes to giving, no distinctions seem to be made across religions, political parties or authorities.

Seoul’s Roman Catholic Archbishop Andrew Yeom Soo-jung, who donated a Bible and rosary last year, this time has sent a commemorative medal presented to him by Pope Francis when the pontiff visited Korea in August. 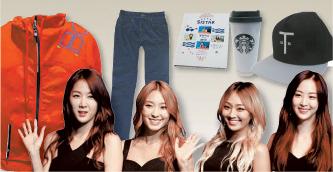 Members from the girl group Sistar donated a tracksuit, leggings, a cap, a tumbler and their CD.

He also sent along celebratory stamps that state, “May the love of the pontiff be shared with all of us.”

Similarly, the Venerable Jaseung, head of the Jogye Order of Korean Buddhism, donated two strings of prayer beads, both contained in pouches bearing his name.

Donations have also come from foreign officials residing in Korea. Chinese Ambassador to South Korea Qiu Guohong contributed a colorful horse-shaped sculpture that is a replica of a design that was popular during the Tang Dynasty (618-907).

From the arts circle, poet Chung Ho-sung has donated 24 items, including gold-encrusted earrings from the Silla Kingdom (57 BC-935 AD), a picture of Jesus, a framed Buddhist incantation, a book of essays and a fountain pen.

Writer Kim Yeon-su sent the blue windbreaker he wore when he walked along the Silk Road last year, and Moon Chung-hee, the head of the Society of Korean Poets, donated a framed photo with a personally written verse below it.

Entertainers also followed suit, contributing items that are fashionable and sure to be a hit with their fans.

Singers from Starship Entertainment, a management company that has grown rapidly in recent years, contributed to this year’s auction.

Hyorin, a member of the girl group Sistar, donated a tracksuit and leggings.

Her bandmate, Dasom, also put up an old baseball cap.

Another Starship singer, K.Will, donated his beanie, a T-shirt and an autographed copy of his album, while the boy band Boyfriend donated a tumbler and two pairs of earphones. “We are giving away the earphones hoping that they will listen to our newly released album with them,” said Donghyun, the group’s front man.

Junggigo, who had a huge hit in the first half of this year with the duet song “Some” with Sistar’s Soyou, also took part, donating the sunglasses he wore this summer, and rapper Mad Clown donated his trademark cap.

There were donations from athletes as well. Bae Sang-moon, who won the Frys.com Open in the first PGA Tour event earlier this week, donated a Callaway Big Bertha Beta driver - the same kind he used in the Frys.com Open.

“I’ve done very well in recent competitions; the new driver let me swing further and more easily,” Bae said. “I should sign it, but I’m just donating it because I won’t be able to make it back to Korea [by the donation deadline]. I will sign my autograph when I go back to Korea.”

Attendees of the annual flea market can also enjoy musical entertainment. The Hidden, a band who appeared in the JTBC program “Hidden Singer,” will perform, among others.

The 600 Citizen Wind Orchestra, an ensemble of amateur musicians, will take the finale.