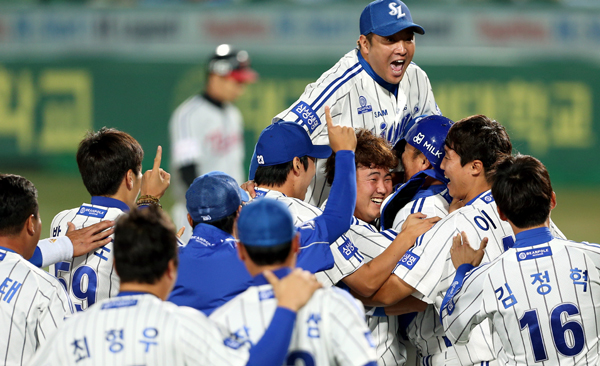 Samsung Lions players celebrate in front of their fans at home in Daegu after beating the LG Twins on Wednesday to clinch their fourth consecutive Korea Baseball Organization title. [NEWSIS]

On Wednesday at home in Daegu, the defending champions popped the corks off champagne bottles to celebrate after beating the LG Twins, 5-3, thanks to a solo home run by Yamaico Navarro of the Dominican Republic off Twins reliever Yoo Won-sang when the game was tied 3-3 in the bottom of the eighth inning.

As closer Lim Chang-yong got Son Joo-in to pop up to shortstop to end the game, Samsung players and Manager Ryu Joong-il raised their arms and ran from the dugout to celebrate the moment.

Just like that, the Lions remained kings of the KBO jungle with a record of 78-46-3.

The Lions now must prepare for an even greater accomplishment - winning their fourth consecutive Korean Series title.

“Since we have a few weeks remaining until the Korean Series, we have earned enough time to prepare,” said Ryu on Wednesday. “It doesn’t matter who will be our Korean Series opponent. We will work hard to give fans our best performance of the year.”

For the past few years, the Lions have been slow starters. They had a hard time in the beginning of the season, then started to bounce back when summer approached.

This season was a little bit different.

Though they lost leadoff hitter and center fielder Bae Yeong-seop to mandatory two-year military service and closer Oh Seung-hwan to the Hanshin Tigers in Japan, they had a solid April with a winning percentage of more than .500. By May 17, they were in first place.

It looked as if the Lions were going to win the regular season easily throughout June and July, but they couldn’t shake the Nexen Heroes until the final days of the season.

Their most dangerous time was earlier this month when the league resumed play after the 2014 Incheon Asian Games. Samsung’s five-game losing streak after the break allowed the Heroes to get within one and a half games.

Traditionally, the MVP award is given to a player on the team that finishes first during the regular season, but 2014 could be an exception.

The favorites to win this year are all members of the Heroes: Seo Geon-chang, Park Byung-ho, Kang Jung-ho and Andy Van Hekken.

Going into tonight’s final game, Seo needed just one hit to become the only player in KBO history to have 200 hits in a season, and Park was the first player with 50 or more homers in a season in 11 years. Starting pitcher Hekken is the KBO’s only 20-game winner, and Kang has hit more home runs than any other KBO shortstop ever, with 39 as of Wednesday.

But the Lions were stronger than the Heroes as a team. Starting pitchers Yoon Sung-hwan (12 wins), Jang Won-sam (11 wins) and Bae Young-soo (8 wins) combined with American J.D. Martin (9 wins) and Dutch import Rick VandenHurk for a formidable rotation. VandenHurk led the staff with a record of 13-4, 180 strikeouts and a 3.18 ERA.

And the bullpen, especially An Ji-man, shone all season long.

One of the biggest surprises was 38-year-old slugger Lee Seung-yeop, who struggled last season with a career-low .253 average and only 13 homers. This year was a different story, as Lee became the oldest player with a .300 batting average, 100 RBIs and 30 homers.

Along with Lee, Choi Hyung-woo, Park Suk-min and Chae Tae-in led the offense.

The Lions also enjoyed watching young prospects mature. When the team lost veteran catcher Jin Gap-yong and Lee Ji-young at the beginning of the season, 25-year-old Lee Heung-ryeon, who made his KBO debut this season, filled the void. And 24-year-old Park Hae-min became the starting center fielder after going two-for-four with a triple and two RBIs against the Doosan Bears on May 9. Park played only one game last season in the KBO, but hit .294 with 36 stolen bases, the fourth most in the league, in 2014.