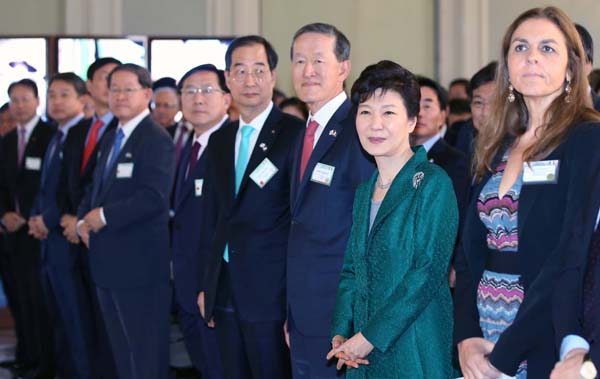 KITA said that its chairman, Han Duck-soo, who will attend the meeting today in Milan as a member of the president’s economic delegation, will call for closer trade and investment relationships between EU members and Asian countries at the Asia-Europe Business Forum, held prior to the ASEM summit’s regular sessions.

According to KITA, Han will deliver a keynote speech on behalf of Asia-based businesspeople, with the EU-based business lobby group Business Europe and CEOs of major businesses based in the two regions attending.

“Asia and Europe are the largest trade partners with each other, and the total trade has kept increasing by an average of 8.2 percent every year since 2000,” said Han.

“We can boost trade and investment by jointly executing our countries’ economic policies, further promoting FTAs and increasing talent exchanges.”

KITA said Han will talk about the European Union’s two flagship growth plans for the long term, Horizon 2020 and Eurostars.

“Europe already has an advanced network of innovative research in fields of environment, energy and advanced technology,” said Han. “The potential for collaborative synergies between Europe and Asia are obvious.”

As for free trade agreements, Han praised their benefits and described how the three-year-old Korea-EU FTA has helped both countries maintain investments and export activities amid tough economic times.

Korea is the only country that has an FTA with the European Union, while six other Asian countries - Japan, Singapore, India, Taiwan, Vietnam and Malaysia - are negotiating pacts.

According to KITA data, incoming investment from the European Union to Korea shot up 47 percent in 2013 alone.

“In the long term, we also need to consider mechanisms to formally connect the European Union and the Regional Comprehensive Economic Partnership [RCEP] that is currently under negotiation,” added Han.

KITA said Han will address how the two regions can strengthen cooperation in other areas: closer joint business projects among small and midsize companies in the regions; exploring new markets via joint projects; joint development of eco-friendly technologies; and extensive exchanges of workers.

He explained that an Asia-Europe talent exchange program called ASEM Duo, which started in 2001, is an example of such cooperation, but pointed out that the program remained temporary.