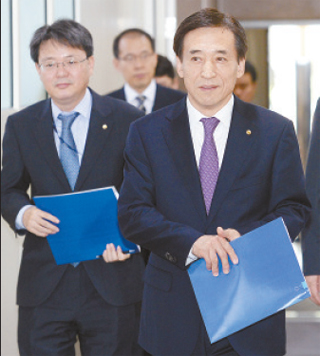 As the economic deceleration in Europe continues to spook financial markets, the Korean central bank was forced to make its second reduction of the key borrowing rate this year.

As generally expected by local markets, the Bank of Korea yesterday decided to shave 0.25 percentage point off the seven-day repurchase rate to 2 percent. The decision was made just two months after it readjusted the rate from 2.5 percent to 2.25 percent in August.

It is the lowest rate in four years.

The last time the central bank decided to lower the benchmark interest rate to this level was after the global financial meltdown in late 2008 that started with the bankruptcy of Lehman Brothers.

Fear of a spillover to the Korean economy built and the central bank had to take aggressive action to ward it off. The rate cut that started in late 2008 continued into the first two months of the following year. By February 2009, the interest rate was shaved to a historic low of 2 percent and remained at that level for 17 consecutive months.

It was only in the summer of 2010 that the central bank started to raise the interest rate as the economy showed signs of robust recovery.

Although the current economic situation is not as devastating as in 2008, the recent decline in Europe’s economy has worried the Korean government, which fears that the economy will fall into the kind of deflation currently plaguing Japan.

Avoiding that has been the mission of Choi Kyung-hwan since he was made deputy prime minister for the economy and finance minister in July.

At a press conference held after the central bank’s monthly monetary policy committee meeting, Gov. Lee Ju-yeol admitted that the worsening economic situation in Europe was the reason that contributed to yesterday’s decision.

“The eurozone situation is much worse than it was believed to be,” Lee said. “It is obvious that the external influence on the Korean economy is huge since half of the nation’s GDP relies on exports. So we have reflected the decelerating eurozone economy in our economic outlook.”

Data released last week showed that industrial output in Germany was getting worse, while other major economies in Europe such as France and Italy are expected to see declines in economic growth this year.

Due to the disappointing growth in Europe, the BOK yesterday revised its outlook for both this year and next year.

The central bank projected that this year the economy will expand 3.5 percent, downgraded from an earlier 3.8 percent estimate. For next year, the economy is expected to post 3.9 percent of growth, which is 0.1 percentage point lower than an earlier projection.

The central bank said private consumption in the third quarter failed to improve as much as expected, while facility investments have been struggling.

Even exports are expected to shrink.

“Many economists believe the situation in the eurozone could get much worse, so we believe it will act as a downward risk for our economy,” the governor added.

The BOK governor once again brushed off fears of the economy entering deflation.

“We are not at the stage to worry about deflation,” Lee said. “As I have stressed several times, core inflation last month weakened to 1 percent, but this was largely because the inflation rate a year ago was much higher on the back of higher prices of processed goods mostly centered on dairy products,” Lee said. “We believe core inflation will be in the 2 percent range.”

He said Japan suffered low growth in the past decades because of policy failures. Additionally, Japan failed to properly handle its aging society.

“We are in a similar situation [to that of Japan] and the government is aware of the seriousness of the situation,” Lee said. “The government has been addressing the problem, such as trying to raise the utilization of women as well as dealing with an aging society.

“I am optimistic that with proper structural reforms, we can avoid a Japan-like deflation.”

On the same note, the governor downplayed accusations that Korea’s monetary policy is stuck in a liquidity trap, in which the central bank injects liquidity into the market as stimulus, but it’s ineffective as fear of deflation and war forces people to horde cash.

“We believe that the lowering of the interest rate in August is having some effect [on the market],” Lee said. “There are various routes through which the impact of monetary policy takes place but in one path, which is deposits and loans, the interest on these have been lowered as much as the lowered benchmark rate, and we believe that with time, that money will flow in to consumption and investment.

“Of course, the impact is slightly weaker than what we expected.”

When asked if he was being too optimistic about next year’s growth by just lowering the outlook from 4 percent to 3.9 percent, the governor said he believes fiscal expansion by the Finance Ministry will keep the economy afloat.

“The government recently announced its expansionist policy to stimulate the economy,” Lee said. “We estimate that the fiscal expansionary policy will have the result of raising economic growth by an additional 0.2 percentage point. Without such polices, the growth would be 3.7 percent, which is not enough.”