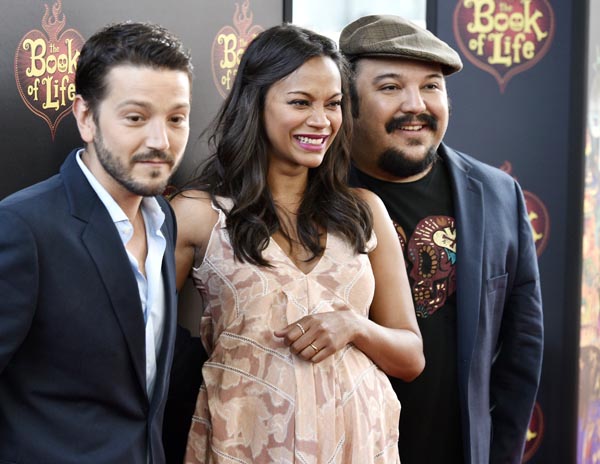 From left: Cast members Diego Luna, Zoe Saldana and director Jorge R. Gutierrez pose during the premiere of the film “Book of Life” in Los Angeles on Sunday. [REUTERS/NEWS1]

LOS ANGELES - Growing up in the Mexican border town of Tijuana, animator Jorge Gutierrez waited to see his people appear in one of Hollywood’s animated movies.

“I never saw myself or my family or my friends up on the screen in animation,” Gutierrez said. “I kept waiting for the Latina princess to show up, and she never did.”

Gutierrez embarked on a 14-year journey to make “The Book of Life,” out in U.S. theaters on Friday, drawing on Mexican art and wooden puppets to animate a colorful love story rooted in the Mexican Day of the Dead festivities.

The kids become the subjects of a playful bet between the vivacious La Muerte and the conniving Xibalba, rulers of the underworld realms, who each pick which boy will win Maria’s heart.

La Muerte reigns over the Land of the Remembered, a never-ending fiesta town painted in a burst of luminous colors, and Xibalba oversees the bleak Land of the Forgotten, a world where souls turn to dust as they are forgotten by the living.

As the three children grow up, Manolo follows his family tradition of bull fighting but refuses to kill a bull or give up music, while Joaquin becomes an indestructible warrior with help from Xibalba. Then there is Maria, the strong-willed beauty who Gutierrez says is “no damsel in distress.”

“There are more Marias out there than ever before,” said Saldana.

“Art is beginning to imitate life and have a much more accurate depiction of real life characters more frequently. Maria to me is my sisters, my friends, my colleagues, my neighbors, women that I read about, women that I admire.”

Death has often been a used as a catalyst for a hero’s origins in animated films for children, from “Bambi” to “The Lion King” and “Finding Nemo.”

But it is rarely placed in the spotlight, and Gutierrez said he was “extra careful” in portraying the Day of the Dead (Dia de los Muertos), when Mexican families gather at the graves of their families and celebrate their lives.

“Mexicans have a very different relationship with the concept of death than everywhere else in the world,” he said.

“In the history of [animation], death is something that’s always been there but no one wants to acknowledge it.”

At its heart, “Book of Life” encapsulates Mexican culture and traditions through Gutierrez’s eyes, a “love letter” to the world he grew up in.

“It’s not a folkloric postcard, it’s truly a modern Mexico that at the same time loves its roots,” said the film’s producer, Guillermo Del Toro, who has been at the helm of magical realist movies such as “Pan’s Labyrinth.”

“I think people are going to be immersed into it through the music, the visuals, and extremely important, the most universal thing of all, emotions.” Reuters