Royals sweep past Orioles to the World Series

Royals sweep past Orioles to the World Series 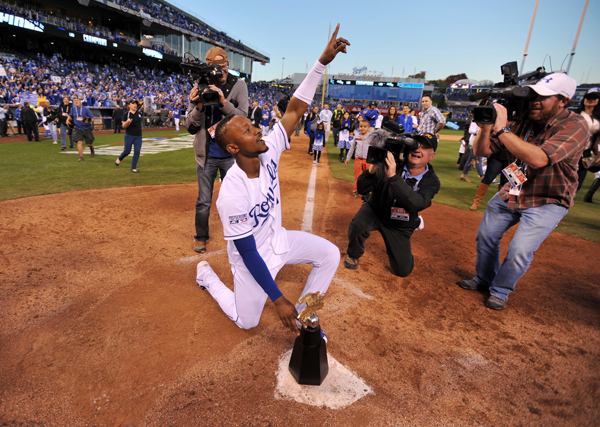 The Kansas City Royals are going to the World Series for the first time since 1985 after beating Baltimore, 2-1, on Wednesday to complete a 4-0 sweep of the American League Championship Series.

Their likely opponents are the San Francisco Giants, who beat St. Louis, 6-4, to take a 3-1 series lead in the National League Championship Series.

Kansas City again proved to be the master of close games, beating the Orioles by a single run for the third time.

“It’s been an amazing run. This is great,’’ said left fielder Alex Gordon, who made a crucial and courageous catch that resulted in a jarring collision with the left-field wall. “Today, same old story: good pitching, good defense and scratch out a win.’’

Outfielder Lorenzo Cain was selected Most Valuable Player of the ALCS, batting .533 and leading an outstanding defense.

After holding the Orioles to three hits in Game 3 on Tuesday, Royals starter Jason Vargas and the bullpen nearly did so again. Relievers Kelvin Herrera and Wade Davis ushered the game to closer Greg Holland, who matched Dennis Eckersley’s record by saving his fourth game in the ALCS.

Kansas City will host the first two World Series games beginning Tuesday. If St. Louis turns around the NL series, it would set up a reprise of the 1985 World Series, when the Royals won their only MLB title by beating the Cardinals.

Regardless of the opponent, the Royals will carry an 11-game playoff win streak into the World Series, one shy of the major league record. The first three date back to 1985 and after a 29-year absence from the postseason, the Royals have thrived by winning eight in a row in this campaign. That includes the wild-card playoff against Oakland, then three straight wins to beat the Los Angeles Angels in the AL Division Series.

“We know once we have the lead, we’ve got the best pitching staff and the best bullpen around. So we’ve got to get them the lead,’’ said Eric Hosmer, who drove in a run. “We’re not done. We ain’t done yet.’’

The Orioles, meanwhile, will limp into the offseason after suffering their first sweep in 21 playoff series, dating to the days when the club was called the St. Louis Browns.

Having won the World Series in 2010 and 2012, San Francisco is in good shape to continue its recent knack of taking the ultimate prize in even-numbered years.

October ace Madison Bumgarner will start on Thursday against Adam Wainwright of the Cardinals.

The Cardinals have good reason to believe they can mount a comeback, as in 2012 it was St. Louis that led San Francisco 3-1 in the NLDS only to have the Giants reel off three straight wins to advance.

San Francisco climbed out of an early three-run hole, and back-to-back bad throws by Adams in the sixth inning helped the Giants rally. “Any time you can put pressure on the defense, you’ve got the opportunity for good things to happen,’’ Posey said. “We’re able to come up with some big two-out RBIs to get back in the game.’’

The Cardinals were clinging to a 4-3 lead when San Francisco put runners at second and third base. With infielders playing in close, the lumbering Adams backhanded a bouncer and stumbled as he tried to set himself to throw home.

The throw short-hopped catcher Tony Cruz as Juan Perez slid across with the tying run.

Joe Panik then hit a grounder right to Adams, who stepped on first base before firing wildly to second in trying for a double play. The throw went wide, forcing shortstop Jhonny Peralta to come well off the base to glove it, and he had no chance to throw out runner Brandon Crawford at the plate.