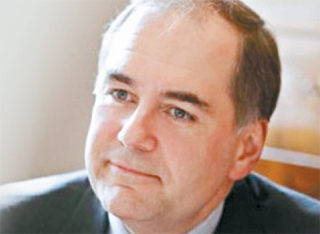 Founded in 1668, Merck is the world’s oldest pharmaceutical and chemical company. Yet its unique ownership and organizational structure has been the driving force behind the company’s long and stable growth, according to Johannes Baillou, chairman of the Board of Partners of E. Merck KG.

Baillou was in Korea for the 15th World Knowledge Forum on Tuesday and the International Meeting on Information Display at Kintex in Ilsan, Gyeonggi, which concludes today.

Local family-run conglomerates have studied the structure of Merck. The company has a Family Board and a Board of Partners, which have different roles.

Family Board members define the company’s central strategy, while the Board of Partners directs investment decisions and business strategy.

“After all, Merck has managed to combine the best of two worlds: It is both a listed company - a member of Germany’s blue-chip index DAX - as well as a family-owned company,” said Baillou.

Merck was founded by Friedrich Jacob Merck after he purchased a town pharmacy called Engel-Apotheke (Angel Pharmacy) in Darmstadt, Germany.

The pharmacy has been at the center of Merck’s business, serving as the foundation for the company’s expansion to an array of product lines from fine chemicals to core materials for LCD and OLED displays.

Baillou said Merck tries to maintain a balance between the values and principles of the Merck family and profits.

“Guided by its values and culture, Merck is not shy about finding its own way and doing things differently than other companies,” he continued. “Its Executive Board, for example, consists of personally liable partners who are held to much stricter levels of responsibility.”

“Merck regards its rigorous commitment to customer service as both an extension of its successful past and a cornerstone for its future,” Baillou said. “And because responsibility does not end at the factory gates, Merck makes sure to live up to its responsibility for its products, the society and environment.”

He added that one example of fulfilling its responsibility is a partnership with the World Health Organization (WHO) to provide medicine for Africans suffering from schistosomiasis.

“Rather than resting on the laurels of past success, Merck is investing in its future,” Baillou said. “Over the past decade, a significant portfolio transformation has been under way that has strengthened the company in key areas.“

One of the sectors Merck has recently focused on is displays. Merck has a leading position in producing materials for LCDs and OLEDs. OLEDs are extremely thin light sources suitable for a wide variety of applications.

“A focus on innovation, talent, efficiency and the company’s global footprint shows that Merck is using its nearly 350 years of experience to lay the groundwork for another few centuries of success,” he said.