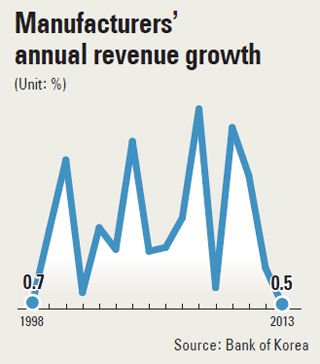 Revenue growth for Korean manufacturers has shrunk to a historic low - lower even than after the devastating financial crisis of the late 1990s that resulted in many companies going under.

And conglomerates including Samsung Electronics and Hyundai Motor are even worse off than small and midsize businesses.

According to a study released by the Bank of Korea yesterday, revenue growth of over 113,000 manufacturers last year was 0.5 percent. This is the lowest since related data has been compiled since the 1960s.

It is even lower than the 0.7 percent posted in 1998 when the country suffered heavily from the Asian financial crisis, called the IMF crisis in Korea.

When adding in the construction industry and service industries like retail and wholesale, overall revenue growth of nearly 500,000 companies last year was 2.1 percent - half of the 5.1 percent reported in 2012.

The study did not include the financial industry, such as banks and insurance firms.

Conglomerates had it the worst, with their growth barely hitting 0.3 percent. This was a severe decrease from 2012 when revenues grew 5 percent. The situation for small and midsize companies was better with revenue growth of 5.6 percent compared to 5.3 percent in 2012.

The biggest factor in the decrease in revenue growth was the appreciation of the Korean won. The won’s average value last year was 1.4 percent stronger than a year earlier.

The central bank said although the nation’s GDP (gross domestic product) improved last year compared to 2012, overall revenues flatlined largely because of the stronger won against the greenback.

This was also why conglomerates - especially those that depend heavily on exports - saw revenue growth decelerate much more severely than smaller companies.

As Bank of Korea Gov. Lee Ju-yeol mentioned during a press conference on Wednesday, the Korean economy relies on exports for nearly half of its GDP. Leading export products from smartphones to automobiles are made by manufacturers, which explains that sector’s poor performance.

The won has lost some strength recently compared to last year, but the improvement is marginal.

Samsung Electronics, the nation’s leading manufacturer, said in a guidance report last week that its revenue in the third quarter shrunk 20 percent year-on-year to 47 trillion won ($44 billion) while its operating profit plummeted 60 percent from a year earlier to 4 trillion won.

The situation is expected to be similar at other major manufacturer-exporters.

FnGuide, a market research company, projected earlier this month that Hyundai Motor will see a limited increase in its revenue in the third quarter from a year earlier to roughly 21 trillion won, and due to the weaker Japanese yen, its operating profit is expected to shrink 3.7 percent. Revenue growth for nonmanufacturing industries also retreated compared to 2012, but less severely than for manufacturers. The annual growth for construction, retail and services industries grew 3.6 percent last year, a drop from 6.1 percent the previous year.

The construction and real estate industries were the only two sectors that saw growth exceeding the previous year because the Park Geun-hye administration has been trying to revive both markets.

Last year, the construction industry’s revenue grew 5.3 percent, up from 3.2 percent in 2012. Real estate including leasing revenues surged 7.6 percent, which is nearly double the 3.5 percent posted a year earlier.