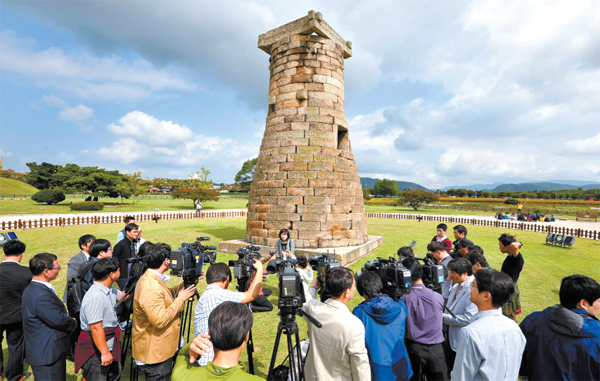 The Cultural Heritage Administration invited journalists earlier this month to take a look at Cheomseongdae, a 1,400-year-old observatory that some people argue is collapsing. The structure is one of many Korean treasures presumed to be at risk. [NEWS1]

GYEONGJU - It remains one of Korea’s biggest mysteries.

Was Cheomseongdae, the seventh-century stone structure in Gyeongju, North Gyeongsang, really an astronomical observatory? Or was it something else - perhaps an altar or a memorial for the people of the Silla Dynasty (57 B.C.-A.D. 935), as some historians argue?

The debate has been going on for decades in Korea.

Those who believe that this nine-meter (29-foot) edifice is a star-gazing tower mostly base their theory on its name. In Chinese characters, Cheomseong literally means “watching the stars,” plus several 15th-century records suggest that the people of the Joseon Dynasty (1392-1910) used to stare into the sky from it.

Opponents of this hypothesis emphasize that none of Silla’s historical records point to Cheomseongdae as an astronomical observatory.

But lately, another dispute has cropped over Korean National Treasure No. 31 - this time concerning its current state.

Fresh claims surfaced last month that Cheomseongdae has been rapidly tilting north in recent months, just like the Leaning Tower of Pisa.

The cultural pieces are not simply Korean assets; some are designated as Unesco Cultural Heritage sites or are on Unesco’s Memory of the World Register. (See the infographic below.)

JTBC, a cable channel and an affiliate of the Korea JoongAng Daily, reported last month that the observatory has tilted three additional centimeters (1.18 inches) in the past eight months alone. Before the report, it was already slanting 20 centimeters to the north from its center point, according to a January investigation by the Board of Audit and Inspection.

The report also said that Cheomseongdae’s body has conspicuous cracks and distortions, which are concentrated on the northern face of the structure.

More worrying, it also cited recent parliamentary data revealing that the Cultural Heritage Administration, which oversees the preservation of the country’s cultural properties, has only performed repair and maintenance on Cheomseongdae three times in the past 50 years.

The Silla Dynasty, when the structure was built, is thought to be Korea’s most forward-thinking and aggressive era in terms of art, culture and science. Its people sported flamboyant gold crowns, made explicit clay dolls, and even elected a woman as their ruler - Queen Seondeok - who is believed to have been the nation’s first female leader. 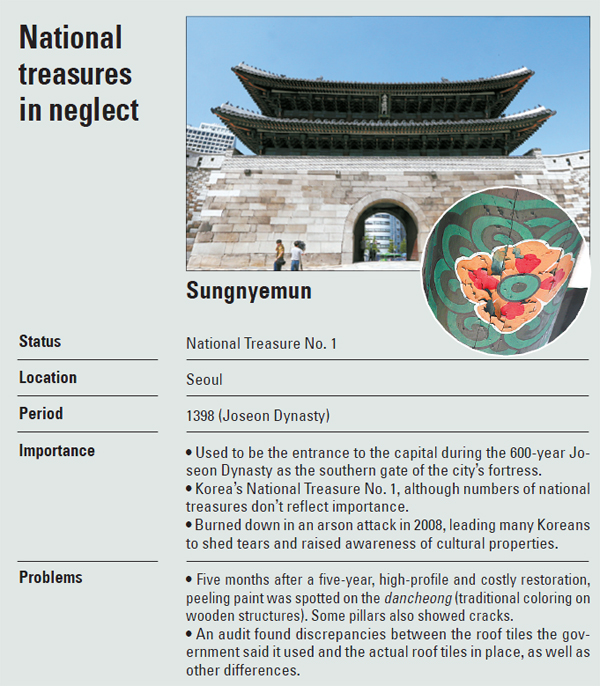 To rebut the media report, the CHA invited journalists and members of its architectural properties committee on Oct. 1 to visit Cheomseongdae. The administration argued that the observatory is not in danger - or at least not as much as the press alleges.

“We believe that the progression of the incline is minimal,” said Cho Eun-kyung, a researcher at the National Research Institute of Cultural Heritage’s architectural heritage division, which comes under the CHA.

Cho, speaking on behalf of the administration, explained that a measurement taken by the research institute on Sept. 15 found that the structure had tilted 0.03 millimeters to the north since January, adding that this is an insignificant figure given that the margin of error is three millimeters.

The research institute also alleged that the fissures and deformities on the structure are not new. 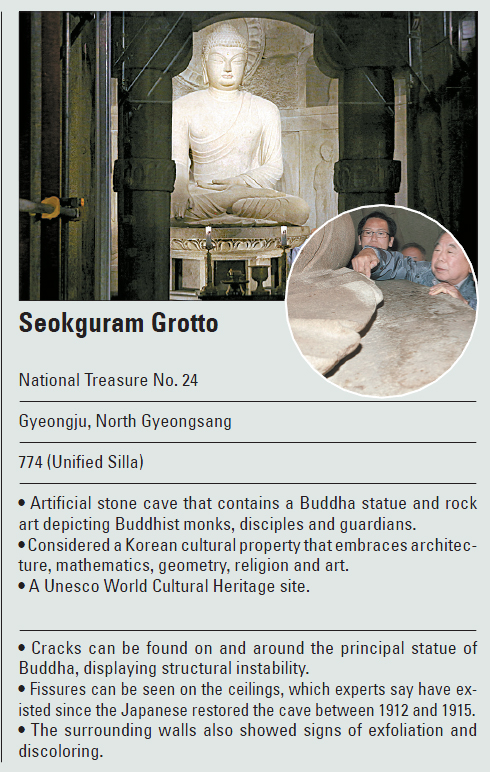 “The cracks and distortions can also be seen in the photos of Cheomseongdae in the 1910s, 1940s and 1967, which we believe is due to the road constructed to the north of Cheomseongdae,” Cho said, showing black-and-white photographs on a screen.

Observers, however, pointed out limitations in the government’s defense, such as how most of the measurements the research institute used are from the past decade. Cho admitted that the data was very recent.

Additional criticism was also aimed at the fact that all the experts at the meeting were members of the CHA’s committee on architectural properties.

CHA explained that it sent out invitations to outside experts, including the specialist interviewed by JTBC, but that they declined to come.


Other treasures at risk

Cheomseongdae is hardly the only Korean treasure causing concern.

A tsunami of reports on cultural properties at risk began flooding in last October. Journalists and lawmakers claimed that Sungnyemun is displaying problems in its coloring, wood and roof tiles. The structure was set on fire in 2008 in an arson attack and was later restored in a high-profile and costly reconstruction in which the government claimed to have used traditional techniques.
Some radicals even called on the state to renovate the national treasure again, just five months after its reconstruction was completed.

The scandal, perhaps the most prolific in the history of Korea’s cultural properties, led to then-CHA head Byun Young-sup to be fired. Byun had assumed the position only two months after the restoration was finished.

The fallout also revealed many skeletons in the heritage administration’s closet: It was neither clear about nor in tight control of its spending; artisans’ voices were overlooked in the reconstruction; and it made compromises it shouldn’t have regarding quality. Loopholes were also revealed in relation to certification of artifact experts.

And last November, reports surfaced that Gyeongju’s Seokguram Grotto is also in danger. The cave is a Unesco World Cultural Heritage site that features a magnificent principal statue of Buddha and surrounding rock art depicting Buddhist monks, disciples and guardians. 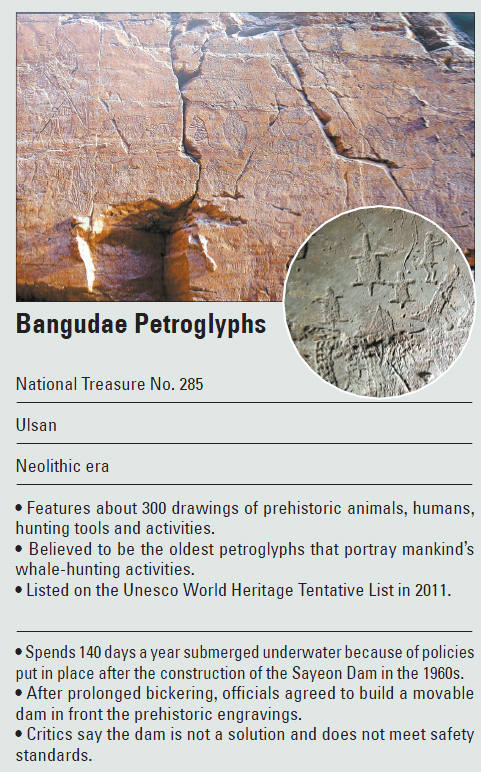 Reports said there is evidence of damage to the grotto, in particular to the Buddha statue, the jewel of the treasure. Cracks can be seen on the pedestal below the Buddha, where its weight is concentrated, according to journalists.

In December, the media’s target was the Tripitaka Koreana Woodblocks, which are on Unesco’s Memory of the World Register. Abrasions, distortions and fractures can be seen on the blocks.

“I woke up every day [in those months], and went to work nervous, thinking ‘OK. What today?’” said an official of the CHA, which is located in Daejeon, south of Seoul.

For four months after Sungnyemun’s restoration problems first surfaced, there were more than 400 headlines on the national treasure, he recalled, adding that although he admits there were problems, the media hype was disproportionate.

“We couldn’t even go to nearby restaurants [located close to the administration] during lunch,” he said.

According to another spokesman at the CHA, “There are no treasures without problems.” 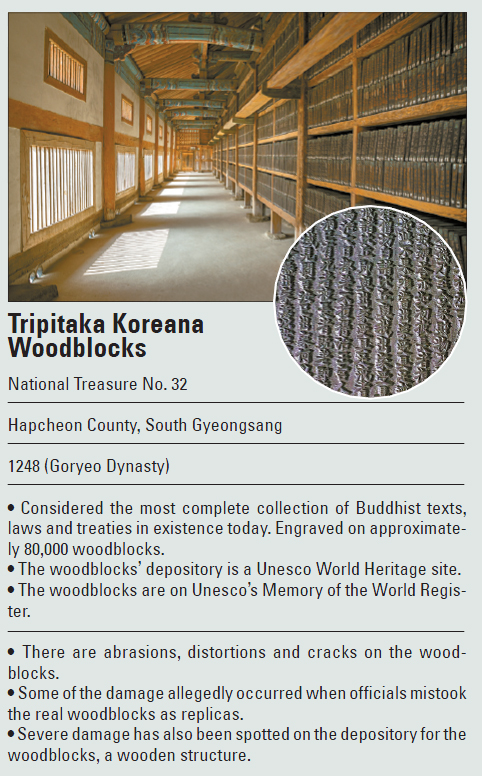 In Cheomseongdae’s case, he said, it would be strange if the 1,400-year-old structure did not have any issues.

“We do admit that there were problems with the restoration of Sungnyemun,” the spokesman continued, “but unilateral media reports [without thorough cross-checking of facts] are unacceptable. ... Nonetheless, we do agree there is a need to streamline and strengthen monitoring, maintenance and repairs of treasures.”

The results of a probe by the government’s Board of Audit and Inspection into the heritage administration and the Sungnyemun restoration, which was announced in May, disproved many media claims.

An allegation that its roof tiles could freeze and rupture was negated, as was an assertion that the cracks were because the wood had not been dried enough and contained too much moisture.

When the results were revealed, they hardly garnered the same attention as when the scandal first emerged.

The audit board simply said that the coloring of Sungnyemun didn’t use 100 percent traditional methods, as promised before the onset of the restoration, and that the size of the roof tiles and the restored gate’s ground level differed from originally planned measurements.

Many insiders in the cultural property field also agreed that reports on the scandal were exaggerated and stressed that the investigation found little except ethical lapses by certain artisans and the CHA’s administrative incompetence.

In an interview in June with Korea’s Maeil Business Newspaper, Rha Sun-hwa, the newly appointed chief of the CHA, said, “Sungnyemun just needs repairs on its coloring,” adding, “I want the public to know that the cosmetic problems doesn’t make Sungnyemun less of a treasure.”

Rha also said the incident has brought more transparency to the cultural property administration and, more importantly, has raised awareness of national treasures and their preservation.

Additionally, Seokguram Grotto was cleared from controversy by at least one noted expert. In March, Giorgio Croci, professor of structural engineering at Sapienza University of Rome, visited Gyeongju and examined Seokguram. He said the fissures on the Buddha statue are not enough to raise extreme concern.

Croci, a preservation expert, has participated in the restoration of Saint Sofia in Istanbul, Turkey, the Leaning Tower of Pisa and the Basilica of St. Francis of Assisi in Italy, among other high-profile projects.

“We will work to improve the heritage administration’s image, which was tarnished [by the Sungnyemun incident] and make it a strong, competitive institution,” Rha assured in the June interview.

Reflecting this mistrust, lawmakers had a field day battering the CHA in a government audit inspecting state organizations last Friday.

Rep. Kim Hoe-seon, a ruling Saenuri Party lawmaker who belongs to the National Assembly Committee on Education, Culture, Sports and Tourism, said data revealed that out of 514 state-designated cultural properties made of wood, 54 percent of them are not insured, meaning that compensation would not be given even if the assets were damaged in a fire.

“In the case of Sungnyemun, it received insurance compensation of 95 million won [$89 million] after the 2008 arson, but the government spent 25 billion won in restoration,” Kim pointed out.

“Insuring wooden treasures is important to lessen the financial burden on the people when restoring these cultural properties and also ensuring a thorough restoration.”

Kim said on Friday that insurance companies are reluctant to give financial coverage for wooden treasures in light of this.

The questionable ethics of CHA officials and some artisans are another issue that must be resolved.

For example, the Sungnyemun investigation found that Sin Eung-soo, the chief carpenter and Intangible Cultural Heritage No. 74, was bribed with about 44 million won from six CHA officials. Police also caught artisans illegally lending others their licenses for money.

It was also reported in November that two officials of the CHA conspired with a private diver to steal a 33-centimeter (13-inch) piece of a Goryeo Dynasty (918-1392) celadon from an underwater archaeological exploration in waters off Jindo Island, South Jeolla.

But why do Koreans care about preserving cultural assets? And why should they?

“State treasures are closely related to patriotism,” said Ahn Chang-mo, a professor of architecture at Kyonggi University who retains a close relationship with the heritage administration.

“Koreans are taught from a young age about culture heritage with phrases like ‘our splendid cultural property.’ That’s why when problems on cultural properties are reported, people relate to it more than other issues.”

“Cultural heritage is equal to people’s pride [about their roots],” a source at the heritage administration also told the Korea JoongAng Daily.

“So many Koreans lost hope in the country because of the Sewol ferry incident. We don’t want them to lose hope because of [problems on] cultural properties. We also hope to put an end to causing distress due to treasures.”