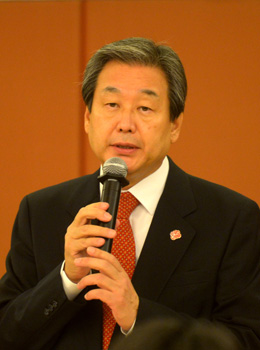 
Saenuri Party Chairman Kim Moo-sung said yesterday that discussion over a constitutional amendment should immediately follow the conclusion later this year of the regular National Assembly session currently under way.

“[Discussion on the constitutional amendment] will explode after the assembly wraps up,” the head of the ruling party said in a morning meeting with the Korean press in Shanghai, one of the last destinations on his four-day trip to China. “[It] can’t possibly be blocked.”

He stressed that the Assembly may form a special committee devoted to discussing the constitutional reform by the end of the year.

A constitutional amendment has emerged as one of most attention-grabbing issues in parliament in recent weeks.

A 150-day legislative deadlock ended on Sept. 30, after the ruling and opposition parties finally reached an agreement on the terms of a special law that would investigate the April 16 Sewol ferry sinking, Korea’s worst maritime disaster. The breakthrough also breathed new life into calls to amend the Constitution.

Through the amendment, some 150 lawmakers aim to revise the current presidential system to a semi-presidential system based on the one in France, in which the president is elected by universal suffrage and endowed with considerable powers, while the prime minister heads a cabinet subject to assembly votes of confidence.

They hope to finalize an amendment by next year, when no significant election is scheduled.

The talk gained force, in particular, after Woo Yoon-keun, the new floor leader for the main opposition New Politics Alliance for Democracy (NPAD), called last year for the amendment to be expedited.

Some members of the pro-Park Geun-hye faction within the Saenuri Party have argued that talk of an amendment should be postponed until after the 2016 National Assembly election, though Chairman Kim has stated that if the schedule is pushed closer to the presidential election in 2017, it will never work.

The ruling party leader’s outspoken advocacy for a constitutional amendment goes against the position of President Park Geun-hye, who has made her stance against the amendment clear, referring to it in January as a “black hole.”

However, despite the president’s remarks, Rep. Kim was inexorably frank about his thoughts on how to amend the Constitution.

“Given [the current five-year single-term presidency] is an all-or-nothing game, nothing works at the Assembly because lawmakers are stuck in a fight over political ideology,” he said. “The problem can only be solved after power is distributed.”

Only by allowing for a neutral zone and opting for a political coalition can society be stabilized, Kim continued. “Don’t the majority of advanced economies, except for the Unites States, run on the coalition government system?”

He cited the Austrian system as an exemplary model, adding that five years was too short for a competent president and too long for an incompetent one.

“I formerly preferred the multiple-term four-year presidential system, but now I think the mixed presidential-parliamentary form of government in Austria should also be deliberated,” he said.