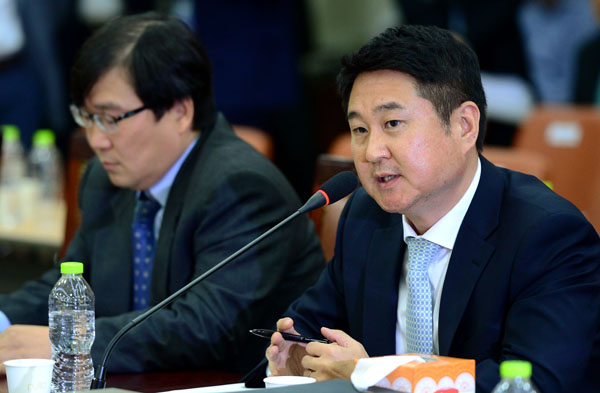 Lee Sirgoo, right, the co-CEO of Daum Kakao, testifies yesterday at a parliamentary audit for the prosecution by the National Assembly’s Legislation and Judiciary Committee. [NEWS1]

Daum Kakao’s co-CEO reiterated his stance yesterday that the country’s largest mobile messenger will not cooperate with authorities in handing over users’ chat records, a defiant move that has raised questions over the state’s right to demand such information and private companies’ responsibility to protect it.

Sitting before lawmakers during an audit yesterday by the National Assembly’s Legislation and Judiciary Committee at the Seoul High Prosecutors’ Office, Lee Sirgoo reaffirmed in his testimony that the company would no longer hand over users’ personal information or chat records from KakaoTalk.

“In the past, we defined surveillance warrants in a broad sense and provided about 10 days of chat records to the authorities in an active cooperative manner. But since there has been so much worry [over that cooperation], our position is that we will not continue to do so anymore,” Lee said.

He added that his company had been too complacent about protecting users’ privacy in the past.

Lee, who has a license to practice law in the U.S. state of Oregon, said that a strict legal interpretation of a surveillance warrant would stipulate that his company set up a hardware device to enable real-time monitoring of users’ conversations.

Since Daum Kakao does not have such a device, nor plan to have one in the future, he said, his company will no longer comply with such warrants - a comment that drew protests from the ruling Saenuri Party lawmakers on the committee.

Prosecutors requested Kakao’s cooperation with court-issued surveillance warrants 147 times from last year until the first half of this year.

Under a warrant for surveillance, authorities would choose future dates for when they wished the chat records for a certain suspect to be retrieved from Kakao’s servers.

The messaging giant would then hand over chat records starting from the first date chosen by prosecutors, though Lee claimed it did not really constitute real-time surveillance since they were retrieving past chat records.

Emphasizing a strict interpretation of the warrant, Lee stressed that his company was not breaking the law, but rather “applying the law in a stricter sense.”

Lee’s repeated refusal to hand over personal information when requested by the prosecution raised the ire of conservative lawmakers, who called the IT giant’s move a “disregard of the law.”

Saenuri Rep. Kim Do-eup went so far as to claim Daum Kakao could be “liable for abetting” serious crimes for refusing to provide what could potentially be crucial evidence in an investigation.

But despite protests from Saenuri lawmakers at the audit, Lee said the company now has no choice but to continue with those plans, citing the loss of public trust in the country’s most popular messenger platform since controversy began.