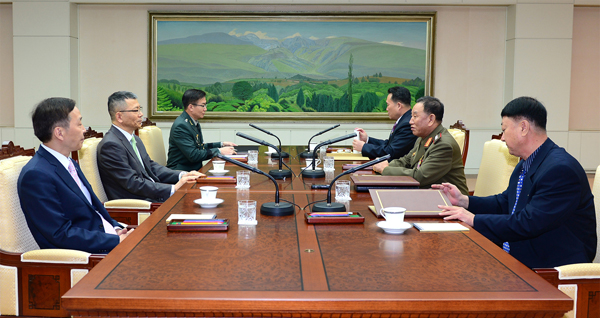 Speculation snowballed yesterday about what really happened at a secretive military meeting between the two Koreas as government officials fed the media fragmented information about Wednesday’s five hours of talks.

The two Koreas held a military meeting at the truce village of Panmunjom on Wednesday. Although it was the first time in three years and eight months that the militaries sat down at a negotiation table, the Park Geun-hye administration didn’t announce it in advance - and continued to remain tight-lipped about the talks yesterday.

Although a lawmaker said a military meeting was taking place at the border and media began reporting the event Wednesday, the government refused to confirm it. Only after it ended did the Ministry of National Defense give a short briefing, announcing that the meeting ended without an agreement. The briefing by ministry spokesman Kim Min-seok was six sentences, although the two sides met from 10 a.m. until 3:10 p.m., more than five hours.

A Unification Ministry official told reporters yesterday some more specifics about the meeting, but his explanations raised more questions.

“The North sent a proposal on Oct. 7 to have an exclusive, emergency contact about the gunfire exchange between the navies in the Yellow Sea,” the official said. “The message said the North wanted to have a discussion about the sea skirmish, not to complain about it.”

Earlier on Oct. 7, an inter-Korean sea skirmish took place near the western maritime border of the Northern Limit Line, and the North sent its message to the South later in the day.

The North said in the message that Gen. Kim Yong-chol, director of the Reconnaissance General Bureau, would be its chief representative, the Unification Ministry official said. A key manager of the North’s intelligence community for two decades, Kim is known to have orchestrated the North’s sinking of the Cheonan warship in 2010 - which it denies - and the shelling of Yeonpyeong Island later that year.

It was unusual for the North to appoint a seemingly hawkish chief representative for talks at a time of thawing relations between Seoul and Pyongyang. Analysts gave varying interpretations to Kim’s appointment as chief delegate. While some said the North was trying to hint at stronger retaliations against South Korean civic groups’ sending of anti-Pyongyang propaganda leaflets across the demilitarized zone, other said it was a message to Seoul that he was ready to make an apology for the Cheonan’s sinking, which prompted sanctions against the North.

Known as the May 24 measures, the sanctions bar all inter-Korean exchanges, trade and investments. President Park said recently that the South is willing to discuss lifting those sanctions at the upcoming high-level talks with the North.

The three-member delegation of the South fueled further speculation about the agenda for the talks.

Kim is the third highest-ranking official from the Unification Ministry.

It was also noted that the government maintained an unusually high level of secrecy for a meeting that ended without an agreement.

“Only a handful knew the meeting was taking place,” said a government official. “I have never seen a case that was kept so secret.”

While speculation is high that the Blue House’s National Security Office was responsible for the extreme secrecy, government officials said the two Koreas had agreed to not publicize the military meeting and that was why Seoul remained tight-lipped.

At the military talks, the North demanded that the South Korean government stop civic groups from sending anti-Pyongyang leaflets to the North.

“The North also said inter-Korean relations would worsen if the fliers continue to be distributed,” a government official said yesterday. “It appeared that the North wanted to remove this obstacle before the upcoming high-level talks and to test the South Korean government’s will to continue the dialogue.”

Although the South replied that the government cannot control civic groups and media in a liberal democratic society, measures are being reviewed to regulate the civic groups’ activities. The Unification Ministry said it will ask the groups to refrain from sending the leaflets and cooperate with the police to effectively stop them.

Seven conservative civic groups, however, said yesterday that they will send 100,000 fliers to the North on Saturday from Imjingak.