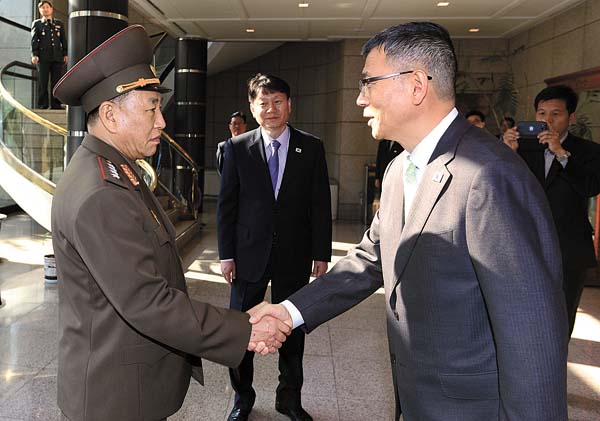 
The two Koreas sat down yesterday for a military meeting to discuss the recent gunfire exchanges on land and near the maritime border, and Pyongyang sent a hard-line general who orchestrated the North’s sinking of the Cheonan warship and shelling of Yeonpyeong Island in 2010.

It was the first time in seven years that the Koreas held a general-level military meeting. The last such meeting took place in December 2007.

The closed-door meeting started yesterday morning at the truce village of Panmunjom at the western inter-Korean border, said Kim Min-seok, spokesman for South Korea’s Ministry of National Defense. According to Kim, the meeting lasted from 10 a.m. until 3:10 p.m., but ended without any agreement.

Lt. Gen. Ryu Je-seung, head of the Defense Ministry’s National Defense Policy Office, was the South’s chief negotiator. Two other officials, including a policy director of the Ministry of Unification, accompanied Ryu.

Gen. Kim Yong-chol, director of the Reconnaissance General Bureau, was the North’s chief representative. A key manager of the North’s intelligence community for two decades, Kim is known to have orchestrated the North’s sinking of the Cheonan - which it denies - and the shelling of Yeonpyeong Island.

“The two sides had a serious consultation with intentions to improve relations, but they failed to narrow down their differences and ended the talks,” Kim said.

Pyongyang proposed the meeting on Oct. 7 after an inter-Korean sea skirmish earlier in the day and Seoul accepted, Kim said. Vice Marshal Hwang Pyong-so, director of the General Political Bureau of the North’s army and the second most powerful official in Pyongyang, sent the proposal to Kim Kwan-jin, head of the Blue House’s National Security Council, Kim said.

At the meeting, the North reiterated its usual demands that South Korean vessels must stay out of its western waters, civic groups must stop sending anti-Pyongyang propaganda via balloons over the demilitarized zone, and the media should stop slandering the North Korean regime, Kim said.

“We made clear our positions that the North must respect the Northern Limit Line and, because we are a liberal democracy, the government cannot control civic groups and the media,” Kim said.

Inter-Korean relations have been a roller coaster ride over the recent weeks. While North Korea’s young leader Kim Jong-un was in seclusion - only making one public appearance since Sept. 3 due to a health condition - a top North Korean delegation led by Vice Marshal Hwang visited the South on Oct. 4 and agreed to resume high-level government talks as early as late this month.

The mood of reconciliation, however, was threatened when the two Koreas exchanged fire on Oct. 7 in the Yellow Sea for the first time in five years after a North Korean vessel violated the Northern Limit Line, the de facto maritime border between the two countries.

Tensions escalated after North Korea fired antiaircraft rounds toward the South’s border towns Yeoncheon and Paju last Friday after civic groups dispatched balloons carrying leaflets. The South returned fire from Yeoncheon but did not respond to the Paju shooting.

The Unification Ministry said yesterday afternoon that the government sent a proposal to the North on Monday to hold the meeting on Oct. 30 at Tongilgak, on the North Korean side of Panmunjom.

Lim Byeong-cheol, a ministry spokesman, said the North has yet to respond to the proposal.

The high-level meeting, if realized, will be the second time top-level officials of the Park Geun-hye administration and the Kim Jong-un regime will meet. The first meeting took place in February.

The Park government has been secretive about inter-Korean contacts, refusing to brief the media about the latest developments. The military talks in the morning were only made public after a senior opposition lawmaker commented on them.

“The two Koreas are reportedly meeting at Panmunjom at 10 a.m. this morning,” Rep. Park Jie-won, a senior member of the main opposition New Politics Alliance for Democracy, said yesterday at the party’s leadership meeting.

“The agenda of the discussion will be the Northern Limit Line and the civic groups sending of anti-Pyongyang leaflets to the North.”

Throughout yesterday, officials of both the Unification and Defense ministries adamantly refused to confirm whether the meeting was taking place or not. Only after the general-level military contact ended without an agreement in the afternoon did the Defense Ministry admit that the talks took place.

The Unification Ministry also kept it secret that Kim Kyou-hyun, head of the secretariat of the Blue House National Security Council, proposed to Pyongyang on Monday to schedule the high-level meeting on Oct. 30. When asked by journalists on Monday about any progress to arrange the high-level talks, the ministry said it was still reviewing a date.