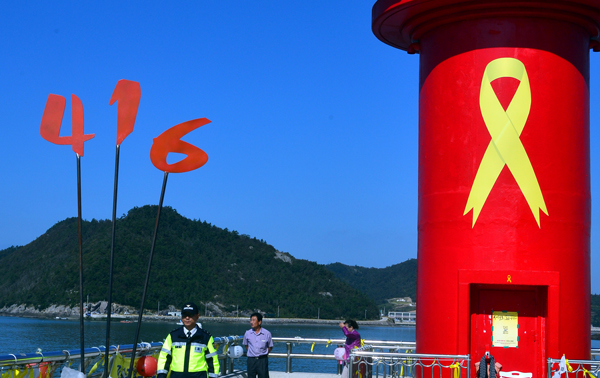 Yellow ribbons, symbols of the victims of the Sewol sinking, can be seen at Paengmok Harbor in Jindo County, South Jeolla. Six months have passed since the ferry capsized on April 16. [NEWSIS]

“I am so sorry Da-yoon that we have not found you yet,” says Mrs. Park staring at the dark sea on Sunday night at Paengmok Harbor in Jindo County on the southwestern coast.

Park’s niece, Da-yoon, was one of 10 passengers on the doomed ferry Sewol whose remains have yet to be recovered.

Park has been at the harbor since the day after the April 16 sinking, which claimed more than 300 lives, many of whom were Da-yoon’s junior-year classmates at Danwon High School.

Jindo’s Paengmok Harbor, where the remains from the wreck were brought ashore to be identified by grieving relatives like Park, has largely emptied out. The reporters are gone. Only a few relatives remain, still waiting for the return of their loved ones’ bodies.

Park told the JoongAng Ilbo she is overwhelmed with guilt for her niece’s death because she paid for Da-yoon’s school field trip to Jeju Island.

The 47-year-old woman said her 17-year-old niece had chosen not to go because she thought the cost would be a burden to her financially struggling parents.

“I am a sinner,” cries Park as she collapses against a concrete seawall.

Da-yoon’s mother is suffering from a brain tumor, but she refuses to undergo surgery because her daughter “has not come home yet.”

The mother is still living at an indoor gymnasium in Jindo about 20 minutes away by car from Paengmok Harbor. It was once filled with over 500 grieving families in the days after the tragedy.

Of the 10 victims still missing, five are students from Danwon High School, two are their teachers and three are other passengers.

The last remains were found on July 18 - 91 days ago. They were the remains of a female member of the crew who cooked in the ferry’s canteen.

The parents of Danwon student Hwang Ji-hyun go to Paengmok Harbor every day to prepare breakfast for their daughter. They put dishes on a table facing the sea. Every day, they put a bowl of rice and fruit on the table.

The number of volunteer workers in the search efforts, whose number peaked at 700 at one point, is down to 10. They also help with cleaning the gymnasium and doing laundry for the families.

The remaining relatives are now in talks with the Jindo County Office to move from the gym to another place. The county wants to start using the gym again. The relatives say their worst fear now is to be totally forgotten.

The recovery mission continues, and every day a diving team scours cabins in the overturned ferry.

The joint diving team, which numbers up to 150 and includes the Coast Guard, military and civilians, has carried out 2,839 search missions. Two civilian divers have died in the effort.

The divers scoured a central compartment on the third floor of the ferry 196 times and the cafeteria 70 times. They recovered a large number of remains of young students from those areas.

The divers are now trying to enter four cabins on the fourth floor of the sunken ferry that have yet to be searched. They have been blocked by detritus that shifted as the Sewol turned upside down. They hope the final 10 victims are trapped there.

But the hazards facing the divers grow worse every day as walls inside the wreck corrode and become more likely to collapse. A drop in water temperature is another factor facing the 150 divers every day.

“We dive because we’re determined to find the last remaining victim,” said Capt. Park Kwang-ho of the Coast Guard, who has been directing search operations from a barge over the past six months.

While the search efforts continue, the trial of 15 Sewol crew members indicted for murder, involuntary manslaughter and negligence of duty will hear the prosecution’s demand for a level of punishment on Oct. 27.

The prosecutors want four main crew members including Capt. Lee Jun-seok and three senior navigators found guilty of murder because they abandoned the sinking ship without issuing an evacuation order. They would have known that doing so would lead to a massive loss of life, prosecutors argue.

Captain Lee has claimed he issued an evacuation order.